Regina Lyric Musical Theatre to produce my play this fall 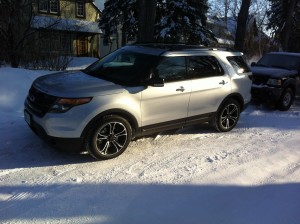 I’m really, really late in writing this review of the 2013 Ford Explorer Sport I had the opportunity to test-drive.

How late am I? So late that when I drove it, one of the things that impressed me the most was the way it handled the deep, icy ruts that plagued the streets of my neighborhood, thanks to this year’s record snowfall. (Oh, okay, actually deep, icy ruts plague the streets of my neighborhood every winter, but the record snowfall certainly didn’t help.)

Those ruts are now but an unpleasant memory: yesterday it was around 28 Celsius. And though it’s cooler today, it does appear spring really has sprung in Saskatchewan at last.

Fortunately, the ability to handle ruts with aplomb was not the only thing that impressed me about the Explorer.

In fact, there were many things. It was comfortable. It was sharp-looking (see the photos for proof). It had all the bells and whistles I’ve become accustomed to in current-model Fords, including Microsoft Sync (which I’m getting better at talking to without losing my temper all the time, thanks for asking), that rear-view camera I really, really miss on my own car after I’ve driven a Ford equipped with it for a few days, an excellent climate-control system, and a very nice sound system. 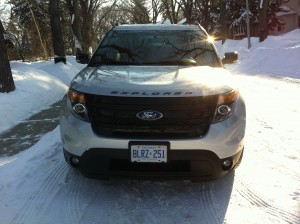 But the one thing I really noticed was…this is a sport-utility vehicle that really takes the “sport” seriously. (Hey, maybe that’s why it’s in the name. You think?)

I don’t always get to take these test drives on a highway trip, but I had reason to go to Weyburn while I had the Explorer, and so for once I did get to drive it a couple of hundred kilometers at highway speed. It had oodles of power for passing: I never felt it was sluggish, which is one of the things I generally don’t like about larger vehicles, being (as I’ve said before) much more of a car guy than an SUV or truck guy. (Although one of my cars is a 1977 Cadillac Eldorado that’s not exactly sprightly, but hey.) 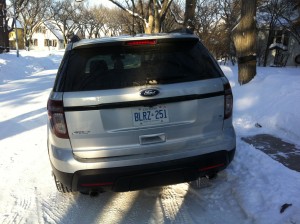 In a nutshell, the Explorer Sport is simply an Explorer fitted with the Taurus SHO’s 3.5-liter EcoBoost V-6. Here it makes 365 hp and 350 lb-ft of torque. Hit the throttle, and it’s pretty clear this is not your usual seven-seat Ford—it rockets to 80 mph before the acceleration starts to tail off. Zero-to-60 times fall from about eight seconds for the naturally aspirated V-6 Explorer to around six for the Sport.

No wonder it didn’t feel sluggish!

So, if I were in the market for an SUV—which I’m not—but if I were, there’s no question the Ford Explorer Sport would be high on my list. Power, comfort, and rutted-Regina-street aplomb.

Permanent link to this article: https://edwardwillett.com/2013/05/test-drive-2013-ford-explorer-sport/