An interview with me at Nine Day Wonder

Some thoughts on the reviews of Masks

Today, while writing the next installment of my regular SF/F-writing column “The Space-Time Continuum” for Freelance, the magazine of the Saskatchewan Writers’ Guild, I realized I’d never posted the previous column online…and so here it is! 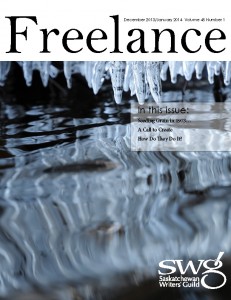 Over the years I’ve participated in a number of science fiction and fantasy writing workshops, to great effect: two of my published novels (Marseguro and Terra Insegura) and a published short story (“Waterlilies”) arose directly out of the Writing With Style workshops instructed by Robert J. Sawyer at the Banff Centre a few years ago.

Workshop run the gamut from Clarion, a six-week boot camp for writers taught by professional SF writers at the University of California San Diego (http://clarion.ucsd.edu/), to local amateur workshops formed by groups of like-minded individuals to provide feedback and support to each other. (If I may quote Sterling again, because he’s very quotable, “Like a bad rock band, an SF-writer’s workshop can be set up in any vacant garage by any group of spotty enthusiasts with nothing better to occupy their time. No one has a Copyright on talent, desire, or enthusiasm.”)

So suppose you wanted to organize your own science fiction and fantasy writing workshop. How do you run it?

Over the years, a very simple but effective critiquing system has been developed that is probably used by more SF/fantasy workshops than not. It’s called the “Milford system,” after the workshop where it was first developed. Here’s how it works:

Each of those attending submits a short manuscript to all of the others in the group. If it’s really short, this can be done during the workshop time itself, but more typically the manuscript is provided ahead of time, either at a previous meeting or via email. Only those who submit a manuscript are eligible to comment on the other manuscripts.

At the meeting, everyone sits in a circle and one manuscript is picked at random. The person to the right of the writer delivers his or her critique, and the critiques proceed in order clockwise around the circle, with a minimum of commentary or interruptions from everyone else—and none at all from the author him or herself, who is firmly enjoined to sit in silence and listen no matter how much he or she objects or inwardly squirms.

Clearly you can follow this same procedure for a group focused on writing poetry, mysteries, biographies, or any other kind of fiction—although for some reason science fiction and fantasy seem to generate more wannabe writers than any other genre.

You’ve probably already recognized the potential pitfalls in the Milford system. First of all, the critiquing will only be as good as the writers in the group. Advice on writing from someone who has no particular knowledge or experience may be of limited value, or even detrimental. More troublesome, it can be very hard to maintain the proper detachment when your writing is under attack from a critique—and way too easy to decide to take revenge when it’s your turn to critique. These kinds of group dynamics can make a workshop go south in a hurry.

So if you’re thinking of running a Milford-style workshop, you might also want to keep in mind Schrodinger’s Rules of Critiquing, developed by fantasy writer Holly Lisle for the Schrodinger’s Petshop writing group established in 1988, when she, too, was an aspiring writer. (You can find these and a list of excellent rules for choosing a writers’ group at http://hollylisle.com/the-good-the-bad-and-the-ugly-or-how-to-choose-a-writers-group/.)

1. Critique the writing, never the writer. Never say, “You are…” or “You should…” Instead say, “The writing is…” or “The story should…”

2. Find what is right in each piece as well as what is wrong.

4. Remember that subject matter is personal. You don’t have to like a story to give it a fair critique.

5. Remember what your biases are and critique around them.

6. Remember that real people wrote this stuff, and real people have real feelings. And therefore, among the things you may not say while critiquing: “That’s awful.” “That’s stupid.” “You couldn’t write your way out of a paper bag.”

As for those being critiqued, there’s really only one rule: “Shut up and listen.”

If you can find a group of like-minded people who will follow those rules while critiquing and being critiqued, then you have the makings of a successful writing group, whatever kind of writing you’re interested in.

Go forth and workshop!

Permanent link to this article: https://edwardwillett.com/2014/01/the-space-time-continuum-workshops/