Another nice review of Masks: “a great page-turner and a fantastic start to an exciting new series”

Cover art reveal! The Lake in the Clouds, Book 3 of The Shards of Excalibur

See you at Word on the Street Saskatoon! 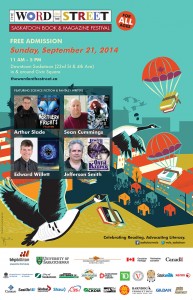 I’m really looking forward to being a featured author at Word on the Street in Saskatoon on September 21. I’ll be part of a panel (along with Arthur Slade, Sean Cummings, and Jefferson Smith) called Other Worlds on the Prairies, focusing on writing science fiction and fantasy, which will be (appropriately enough) in the “Brave New World” tent at 2:30. We’ll be talking and taking questions for an hour, then we’ll be signing books.

The image is the poster WOTS is putting up in high schools. Cool, huh?

Hope to see you there!

Permanent link to this article: https://edwardwillett.com/2014/08/see-you-at-word-on-the-street-saskatoon/