Google Translate AI reminds me of GigaText, a blast from Saskatchewan’s past

The Space-Time Continuum: Maxims and proverbs and saws, oh my! 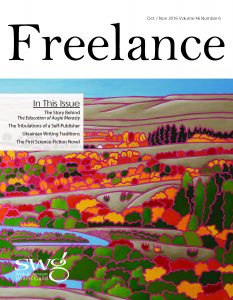 Here’s my latest Space-Time Continuum column for Freelance, the magazine of the Saskatchewan Writers Guild:

Writers love to write about writing, probably because writing about writing is a great way to avoid actually, you know, writing.

Sometimes writing about writing takes the form of a long essay or (ahem) column; sometimes it takes the form of a sage saw, witty aphorism, clever epigram, or wise maxim (another way to procrastinate is to spend several minutes poking around a thesaurus).

Science fiction and fantasy writers have coined a number of these over the years, only some of which relate to writing. Some are more general observations, such Arthur C. Clarke’s Third Law, “Any sufficiently advanced technology is indistinguishable from magic,” or some of Larry Niven’s Laws, such as “never fire a laser at a mirror” and (an observation which those of a political bent should always keep in mind), “there exist minds that think as well as you do, but differently.”

Niven’s six laws specifically for writers were first collected in his 1989 short-story collection N-Space. My favorite of these: “It is a sin to waste the reader’s time.” But the others hold water, too:

“Writers who write for other writers should write letters.”

“Never be embarrassed or ashamed about anything you choose to write. (Think of this before you send it to a market.)”

“Stories to end all stories on a given topic, don’t.”

And this one: “If you’ve nothing to say, say it any way you like. Stylistic innovations, contorted story lines or none, exotic or genderless pronouns, internal inconsistencies, the recipe for preparing your lover as a cannibal banquet: feel free. If what you have to say is important and/or difficult to follow, use the simplest language possible. If the reader doesn’t get it then, let it not be your fault.”

S.M. Stirling quotes an additional “Niven’s Law” in the acknowledgments of his 2003 novel Conquistador!: “There is a technical, literary term for those who mistake the opinions and beliefs of characters in a novel for those of the author. The term is ‘idiot.’”

The king of aphorisms in the science fiction field was Robert A. Heinlein. In his 1973 novel Time Enough for Love, about an extremely long-lived individual named Lazarus Long, he included two “Intermissions,” collections of maxims purportedly drawn from Lazarus Long’s notebooks. You can find them all at http://www.angelfire.com/or/sociologyshop/lazlong.html. (I almost guarantee some will offend you, which, if you ask me, is an excellent reason to read them!)

A few relate specifically to writing. For example:

“A ‘critic’ is a man who creates nothing and thereby feels qualified to judge the work of creative men. There is logic in this; he is unbiased—he hates all creative people equally.”

“If you happen to be one of the fretful who can do creative work, never force an idea; you’ll abort it if you do. Be patient and you’ll give birth to it when the time is ripe. Learn to wait.”

One of my favorites (which I try manfully—but largely unsuccessfully—not to quote every time I attend a poetry reading, is, “A poet who reads his verse in public may have other nasty habits.”

But temper your indignation, oh poets, with this quote which applies as much to Heinlein himself as to the rest of us: “Writing is not necessarily something to be ashamed of—but do it in private and wash your hands afterwards.”

Here are some other writing-related aphorisms from science fiction and fantasy writers I like:

C.J. Cherryh advises, “It is perfectly okay to write garbage—as long as you edit brilliantly.”

Tarzan author Edgar Rice Burroughs wrote, “I have been successful probably because I have always realized that I knew nothing about writing and have merely tried to tell an interesting story entertainingly.” (One could wish many more took that approach.)

From Harlan Ellison: “People on the outside think there’s something magical about writing, that you go up in the attic at midnight and cast the bones and come down in the morning with a story, but it isn’t like that. You sit in back of the typewriter and you work, and that’s all there is to it.”

Should you find it difficult to “sit in back of the typewriter” and work, remember this from Sir Terry Pratchett: “There’s no such thing as writer’s block. That was invented by people in California who couldn’t write.”

I often say that writing is, appearances to the contrary, a collaborative art. Ursula K. Le Guin agrees: “The unread story is not a story; it is little black marks on wood pulp. The reader, reading it, makes it live: a live thing, a story.”

Have I convinced you all these science fiction writers are smart people who know whereof their speak? Then perhaps it is best to let Philip K. Dick have the final word:

“Science fiction writers, I am sorry to say, really do not know anything.”

Permanent link to this article: https://edwardwillett.com/2016/12/the-space-time-continuum-maxims-and-proverbs-and-saws-oh-my/