There’s no metal in a metallic smell

Photo of the Day: Grading, But Not on the Curve 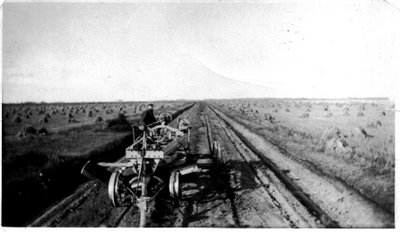 Tonight I’m in Saskatoon, having just been the guest speaker at the annual awards night of the Consulting Engineers of Saskatchewan. I did a very quick (and humorously quippy!) slide show of some of the images from A Safe and Prosperous Future: 100 Years of Engineering and Geoscience Achievements in Saskatchewan.

This is one of them. The caption reads, “Dave Ramsay grades the first mile north of the Carrot River Bridge off of Highway 35 in 1930. ” There’s something very Saskatchewany about this picture: the old-fashioned stooks of wheat and the way the road arrows, straight as a…well, as an arrow…to the horizon appeal to my inner prairie boy. As I said in my talk, it may well be one reason Saskatchewan has one of (if not the) largest road networks of any of the provinces is that, in the south, at least, making a road basically involved getting a grader, pointing it at the horizon, and going for it. (The northern two-thirds of the province, of course, didn’t have it so easy, being afflicted with those whatchamacallits…oh, yeah. Trees. Ugh.)

The talk went really well, the company was convivial, and I signed a lot of books. I even sold two copies of Lost in Translation! Better yet, while I was waiting for events to start, I rewrote the first chapter of Untitled Science Fiction Novel. I find I’m really eager to plunge into the rest of the revision, which I hope is a good sign.

A Safe and Prosperous Future is available directly from the Association of Professional Engineers and Geoscientists of Saskatchewan, or at fine Saskatchewan bookstores such as Book and Brier Patch in Regina and McNally Robinson in Saskatoon.

Permanent link to this article: https://edwardwillett.com/2006/11/photo-of-the-day-grading-but-not-on-the-curve/