A nice new review of Marseguro…

My preview of next week’s Philip Scriven organ recital…

Things I Found in my Mother-in-Law’s House: The Medicine Cabinet

It’s a bit of a cliché: the guest who can’t resist poking through his host’s medicine cabinet, just to see what’s in there.

Well, Ed Willett isn’t a guest in his own home but he sometimes feels like it, because it’s full of odds and ends that have collected over the 70 years it’s been in his wife’s family.

Ed has been exploring the nooks and crannies of his mother-in-law’s house for the past few week, and this week he did, indeed, dig into the medicine cabinet. I joined him earlier today to see what he’s found.

That’s quite the collection of bottles, tins and boxes you’ve got there, Ed. And some of them look pretty old. 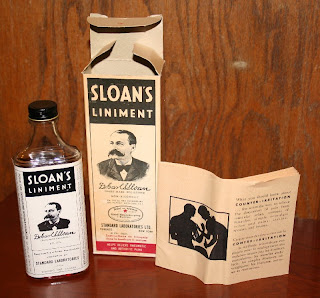 Decades old in some cases, I’m sure, although of course it’s hard to be certain with some medicines, because sometimes the packaging hardly chances at all over the years.

Take this one, bearing the picture of a man with a quite remarkable mustache. It contains an almost full bottle of Sloan’s Liniment. It certainly looks old, but I imagine the packaging didn’t change much over decades. It is bilingual, and the Consumer Packaging and Labeling Act requiring bilingual packaging wasn’t introduced until 1974, but it’s also quite likely that Standard Laboratories of Toronto, which packaged it, was already making bilingual packages for sale in Quebec prior to that.

However old this particular bottle is, Sloan’s Liniment is a long-standing home remedy. It was developed by Earl Sawyer Sloan, who was born in Zanesfield, Ohio, in 1848. Earl’s father, Andrew, had a way with horses, and concocted a strong-smelling liniment he rubbed into their shoulders when they stiffened after ploughing. (According to legend, he got the recipe from the local Indians.) In 1871, Earl moved to St. Louis, taking several bottles of his father’s liniment with him. HE and his brother, Foreman, peddled it for about 25 years at farms, horse fairs and carnivals. At some point someone with sore muscles tried it on himself, and discovered it helped ease pain. The Sloan brothers started selling even more with the slogan “good for man and beast.” Earl advertised it in Chicago streetcars, and business boomed even further. In 1900 Earl (who began calling himself “Doctor” Earl S. Sloan) organized a company to manufacture the liniment. He advertised heavily in newspapers, opened offices in Canada, England, Australia and Amsterdam, and retired a wealthy man, selling the business in 1913. Sloan’s Liniment is still being made, I believe: its secret ingredient is capsaicin, one of the substances that makes peppers hot. Basically, it mildly irritates the skin, which cause the body to produce so much of one of the neurotransamitters that communicates pain to the brain that there’s none left over to communicate the pain from the strained muscles or aching joints. HEET and other similar liniments use the same basic stuff.

That’s a pretty–and pretty old looking–green bottle next to it. Is that another patent medicine?

Yes. This one is Pineoleum, “a combination of mentol, camphor, oils of cassia, eucalyptus, pine needles and refined petrolatum,” “an oil spray and inhalant for nose and throat.” I didn’t find nearly as much about this as I did about Sloan’s, but the stuff dates back to the late 19th century as well, and was put to a number of uses. I ran across a column by a dentist who described an ad he saw while perusing the September, 1930, issue of Oral Hygeiene, which claimed dentists could prevent catching colds from patients by spraying the patient’s nose and throat with Pineoleum.

Both of those are in nice glass bottles, but you’ve also got a couple of old tins there, little flat ones. What are in those?

One’s a product we all instantly recognize: Phillips’ Milk of Magnesia tablets. Again, there’s no sure way to date this. We still see various lozenges and other products in tins similar to these. Drug manufacturers began using them in 1879 when the Somers Brothers of Brooklyn, New York, developed a method of printing labels directly onto tin. Phillip’s Milk of Magnesia Tablets were among the earliest products to take advantage of the new packaging. 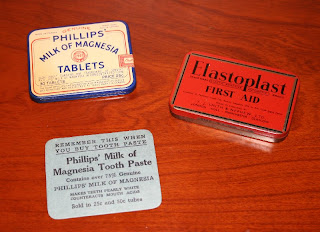 This other tin contains Elastoplast band…er, “elastic adhesive antiseptic” bandages. (I started to call them band-aids, but of course Band-Aid is its own brand name.)

You’ve got a couple of interesting soaps there, too, don’t you?

Well, technically I have one soap and one soap-substitute. 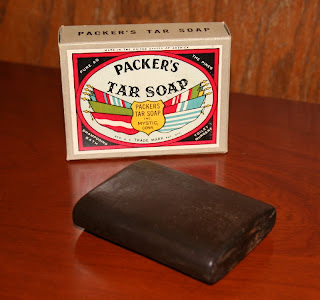 This is the only black bar of soap I think I’ve ever seen. It’s an unused bar of Packer’s Tar Soap, and although this particular bar probably isn’t very old–older bars were packaged in tin, not cardboard–the soap itself is fascinating. Capt. Daniel Packer once commanded his own sloop, but when gold was found in California in 1849, he headed out west. Apparently his real niche was neither as sailor or miner but as soap manufacturer, and after developing his soap in California, he returned to Mystic, Connecticut, where he began begin manufacturing what he called “lightning soap” in 1869. Sailors from the port spread its fame far and wide and it became a huge success. It claims to be “Pure as the pines,” so I’m guessing it’s pine tar, and not petroleum tar, that gives it its name. The 1886 Cincinnati Lancet-Clinic, a medical journal, calls Packer’s Tar Soap “the best of all, whether as a toilette or a surgical soap…remarkably pure, cleansing and healing” and the February, 1909, issue of Canadian Life and Resources has an ad for it claiming you can use it to “fortify your skin against the annoyance of wintry weather.”

I may have to give it a try sooner rather than later. 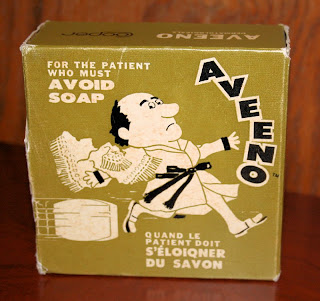 This other box caught my eye because it’s rather unusually illustrated with a cartoon of a man in a dressing gown, towel over one arm, fleeing a bar of soap: “For the patient who must avoid soap…” it says, and it contains several doctor’s sample bars of Aveeno Emulave soap substitute. My mother-in-law, Dr. Alice Goodfellow, received these in 1971 when she was working in Toronto.

And what old-time medicine cabinet would be complete without a bottle of castor oil? 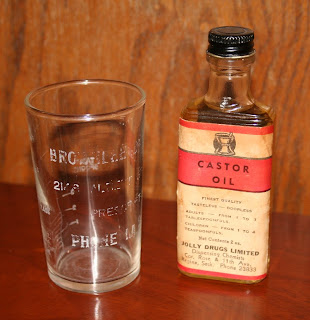 A. Jolly, who was born in Brantford, Ontario, in 1879. After working in various drug stores in the East, he came to Regina in January, 1905, where he first managed a drug store, then bought it. At one time he had five drug stores in the city, but he eventually settled down to running this one, which was in a two-story building with his store on the bottom and a rooming house on top. (It’s now a parking lot.) Jolly worked there six days a week until he died in 1965 at the age of 86.

According to the 1924 book The Story of Saskatchewan and Its People, by John Hawkes, “Mr. Jolly is said to have the finest drug stores in all Canada. He carries a large stock of drugs and a complete line of phonographs.”

Care for a sip? You could use this measuring glass from Brownlee Drug Store, located at 2146 Albert St.–that would be the Nouveau Gallery today. It would be like tasting liquid Regina history. Or perhaps you’d prefer some decades-old Norwegian Cod Liver Oil?

Permanent link to this article: https://edwardwillett.com/2008/10/things-i-found-in-my-mother-in-laws-house-the-medicine-cabinet/