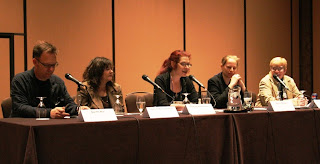 A good day for me, but not much to blog about. I only attended one panel, on YA Fantasy, and I didn’t stay to the end because I thought I should drop in on the SF Canada meeting going on next door.

Sharyn November, editor of Firebird Books, made a…forceful…moderator (that’s her in the centre of the photo). Also on the panel were (left to right) Garth Nix, Linda DeMeulemeester, Anne Hoppe, editor at Harper Children’s, and Kathryn Sullivan. If I were to sum up the panel in one sentence (which, indeed, I am about to), I would say, “There’s a huge amount of YA fantasy being published, a lot of it is drek, but the best stuff will last.” Which isn’t exactly earth-shattering news, but it still made for an interesting panel, thanks to the people involved. Worth noting that the room was extremely full; there’s lots of interest.
After that, I just kind of wandered around and chatted with various people (and had lunch with other people) until it was time to meet with my editor from DAW Books, Sheila Gilbert. No word yet on the proposed third Marseguro-related book, but I was encouraged to hear that she really likes the fantasy proposal I gave her (tentative title: Magebane). Nothing firm yet, but I’m keeping my fingers crossed. Oh, and she promised to send me the cover art for Terra Insegura when she gets back to New York, so I’ll be posting that soon!
This evening was also spent in the company of Sheila, along with Betsy Wollheim, Tad Williams, Violette Malan, P.R. Frost, and artist Todd Lockwood. We all (at DAW’s expense) had dinner at the River Cafe, which I had recommended and which, much to my relief, everyone loved. It was a nice leisurely three-hour meal, which means I just got back an hour or so ago.
So that was my day. Not very informative if you’re looking for a con report, but I certainly had a good time and I’m excited that I might get to tackle a fantasy soon. 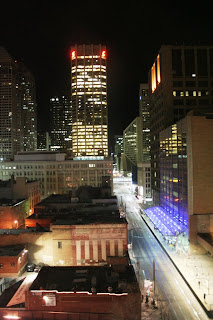 Meatier con-blogging tomorrow, when I should have photos from the World Fantasy Awards banquet, plus a list of winners.

Permanent link to this article: https://edwardwillett.com/2008/11/world-fantasy-convention-day-3/