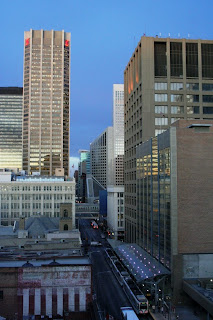 I had a pretty slow day today since I didn’t go to any panels (because the ones I was interested in coincided with other things). First thing I did this morning was take the obligatory Photo From My Hotel Room Window.

Once I’d been out and had coffee and all that stuff (I had a nice chat with artist James Beveridge while I drank my second cup) I took a few turns through the dealer’s room (and took a photo). It’s quite different from the one at the World Science Fiction Convention: smaller, of course, since there are only about a seventh as many people here as there 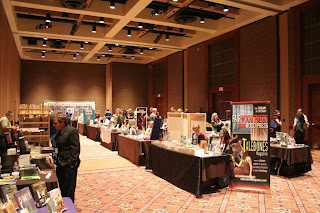 would be at even a smallish WorldCon, but also much more heavily focused on books–pretty much to the exclusion of anything else, actually.
At 1 p.m. I was supposed to give a reading, but alas only one person showed up (Dominique Benoit, who is my co-blogger on the SF Canada members’ news blog), so instead of reading, I just chatted with her. I hooked up with friends for a chat in the lounge for a while, then met with agent Sally Harding–not that I’m looking for an agent (Ethan Ellenberg is my agent) but simply to get acquainted, since we’re both members of SF Canada. She was just picking people’s brains for whatever information they might have about the field–I didn’t have much to offer, I fear. She also helped me out with a few names for people with the Canadian publishers who might be interested in a YA project I’ve got.
I went out for dinner with several of the members of the Imaginative Fiction Writers Association (Barbara Hambly was at our table, too, but I didn’t get to talk to her). If not for World Fantasy people, the Bear Kilt (yes, we went there again) would have been pretty much empty, so nice to know we’re helping to support the local economy. 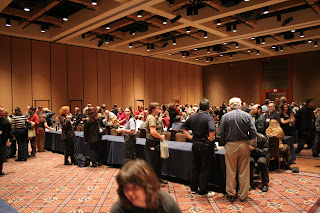 At 8 p.m. it was time for the mass autograph session. This is apparently a World Fantasy tradition: all the attending authors in one big room, signing their little hearts out for anyone who wants an autograph. Thanks to having my book in some of the book bags, mostly, I signed eight or nine copies of Marseguro, plus a couple of programs. I sat between 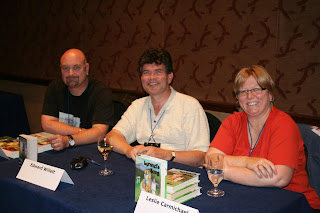 Leslie Carmichael and Simon Rose, and thus at least had interesting people to chat with over the two hours we were there. Garth Nix wasn’t too far away, so I sneaked a picture of him, although I didn’t get a chance to tell him how much I enjoyed his Abhorsen books. 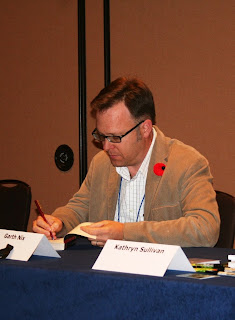 Then it was up to the SF Canada party in the Con Suite, a quick call home, another turn at the SF Canada, and back for bed.
I do hope to take in a couple of panels tomorrow, and tomorrow I’ll also be meeting with my editor from DAW, Sheila Gilbert, to discuss my next book after Terra Insegura. Then tomorrow night is the DAW dinner at the River Cafe, and if I get back in time, I’ll sing a few Tolkien songs (the Donald Swann settings that I’ve done several times before) at the Tolkien-themed event that will run most of the evening.
I continue to enjoy the convention, and I think it’s been worthwhile business-wise, too. Another update tomorrow night!

Permanent link to this article: https://edwardwillett.com/2008/11/world-fantasy-convention-day-2/