Grandpa, big brother, and me 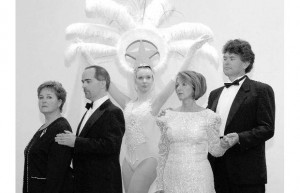 Today’s Regina LeaderPost has a preview of next week’s Lyric Musical Theatre production of Stephen Sondheim’s Follies, in which I play Buddy Plummer.

And no, I didn’t write it myself. Kelly-Anne Reiss did the honours; the photo is by Tony Fleece.

Regina audiences are in for a rare treat as the Lyric Musical Theatre of Regina will be putting on a full stage production of Stephen Sondheim’s Follies.

There has not been a staging of the entire musical in Canada for years, even though several of the songs, including “Broadway Baby,” have become standards.

Director Robert Ursan decided to revive the musical because Sondheim, who also wrote Sweeney Todd, is one of his favourite lyricists.

“And we’re lucky to have the talent here in Regina to do it,” Ursan said about his cast that has more than 40 people.

Permanent link to this article: https://edwardwillett.com/2009/05/leaderpost-preview-of-follies-avec-moi/