An interview with Robert J. Sawyer

The following article was just published in the July/August issue of FreeLance, the newsletter of the Saskatchewan Writers Guild. 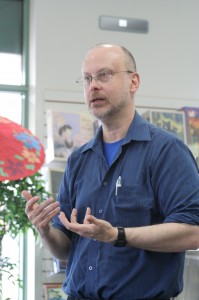 The Canadian Light Source, the giant synchrotron in Saskatoon, does not immediately spring to mind as a likely venue for a writer-in-residence.

Unless, perhaps, that writer is renowned Canadian science fiction author Robert J. Sawyer. Then it seems like a perfect fit.

“Most of my books involve working scientists,” Sawyer notes. “I have often visited science institutions, but I’ve never been immersed for weeks on end in the ambience, the atmosphere in which science is done. That experience will lend an enormous verisimilitude to my future writing.”

The unusual pairing was born a few years ago when, after a tour of the CLS with fellow Canadian SF writer Robert Charles Wilson, Sawyer, Wilson, Matthew Dalzell, the communications coordinator for the CLS, and Jeff Cutler, director of industrial science, discussed over drinks the possibility of Sawyer returning and spending more time.

Sawyer suggested the writer-in-residence idea. Dalzell and Cutler were intrigued, and best of all, Cutler found money within his budget to pay for the residency, so no Canada Council grant was required.

Although the location was unusual, Sawyer’s duties as writer-in-residence were typical: he spent forty percent of his time mentoring writers and teaching and talking about writing (he gave a creative writing lecture every Monday at noon to CLS staff), and sixty percent on his own writing.

He says the most interesting aspect for him was the “wealth of little details” he picked up about life at a full-time research facility, from the weekly summer staff barbecues to how the shredding of sensitive documents was handled to the qualifications and salaries specified in job postings.

Getting the details of both science and the work of scientists right is important to Sawyer, whose current books are all set in the present or near future.

There’s a good reason for that. “I was writing what I felt were significant works of social commentary that weren’t being read by anybody but die-hard science fiction fans,” he says. Now that he focuses on the here-and-now (or at least the not-too-far-away), “there are all kinds of people who are Robert Sawyer readers who don’t think of themselves as science fiction readers.

Sawyer thinks his brand of science fiction should ideally have a different name: he likes “philosophical fiction,” “phi-fi” instead of “sci-fi.”

“It really is a literature of ideas,” he points out. “It’s about fundamental questions. Who we are, where we’re going, whether we have free will, what value consciousness has, is there a God? These are the questions SF deals with. The name ‘science fiction’ really doesn’t convey that.”

But, he adds, “I proudly proclaim myself to be a science fiction writer, and never hide behind ‘speculative fiction.’”

Sawyer’s newest novel, Wake, the first book of a trilogy, grew out of a popular science article Sawyer read that mentioned that at some point early this century the Web will have as many interconnections as the human brain.

“That led me to wonder what might happen then,” he says. In Wake, he suggests that the Web could gain consciousness, just as we did in our evolutionary past when our brains reached a certain level of complexity.

“I spent four years researching the dawn of consciousness to see what parts were innately biological and what parts would be shared by anything that was becoming self aware,” Sawyer says. “One of the parallels that I found was the story of Helen Keller, who had been blind and deaf, in almost complete sensory deprivation, from her eighteenth month of life. She had no really sophisticated consciousness, no sense of personhood, no self-reflection. That became the template for me.”

If the Web gained consciousness, Sawyer thought, it would do so in a similar state of sensory deprivation, and, like Keller, would need help to move beyond it.

“I often say this is a high-tech retelling of The Miracle Worker,” Sawyer says. In Wake, the miracle comes from an unlikely source: Caitlin Decter, a blind teenage girl.

When he was twelve years old, Sawyer spent six days blind, eyes bandaged, after being hit in the face with a snowball. “I’ve been looking for the right place to organically, not gratuitously, use that life experience,” he says. “A writer ultimately cannibalizes his entire life.”

He didn’t rely entirely on his own experience: he also had seven blind people read the manuscript and comment on his depiction of what their lives are like.

Although Sawyer has had a taste of blindness, he’s never been a teenage girl. But then, he takes issue with the old adage to “write what you know.”

“Yes, we writers are told to write what we know,” he says. “But writers can also find things out. You can always decide to become knowledgeable about something.

“It’s the same for a fiction writer. I’m writing my twentieth novel. I’ve written a hundred significant characters. If they were all middle-aged bald white guys who watched way too much Star Trek when they were young, they’d be boring.”

Sawyer laughingly says that if the RCMP didn’t have a dossier on him before, it might now, because he spent a lot of time reading teenaged girls’ blogs and Facebook pages and frequenting the live video chat site Justin TV.

“The public nature of the life of young people today makes it easier to eavesdrop without having to hang around the schoolyard,” he says. He also had teenage girls read the manuscript and offer suggestions.

Like all of his books, Wake is set in Canada. Sawyer is proud of that.

“My books are published all over the world, in fifteen languages. Within science fiction, I have been allowed to be blatantly Canadian, to explore Canadian themes. I get to be a more Canadian writer in this genre than the mystery writers, western writers, romance writers or even the mainstream writers get to be. If you want to be flagrantly Canadian in your writing, and still have a world-wide market, science fiction is a very green pasture.”

With Wake launched, Sawyer is looking ahead to the final two books in the trilogy, Watch and Wonder. Watch is written; Wonder is underway, and the whole trilogy will be out in paperback in 2012—the year in which it is set.

Sawyer, who writes a novel a year, divides each year into four phases: research, first draft, revision, and promotion.

The latter takes him away from Mississauga, where he lives with his wife, Carolyn Clink (herself a poet), three or four months a year.

Fortunately, he can write anywhere. In fact, he says, “I get my best writing time on the road because the phone isn’t ringing and the Internet access is usually pretty nonexistent. The Internet is my crack!”

Sawyer believes strongly in his chosen field of literature. “The ideas of science fiction are still current, and there are new ideas,” he says. “The science is more sophisticated now than ever before, and so the storytelling possibilities are more sophisticated today.”

Science fiction, he says, is “the only scientifically literate form of literature—and it is the only one that has as its brief to deal with fundamental questions.”

He notes that many recent bestselling novels from mainstream publishers, such as Audrey Niffenegger’s The Time Traveler’s Wife and Margaret Atwood’s Oryx and Crake, are science fiction, and thinks that might represent a trend away from science fiction being published by specialized imprints.

In Canada, by Sawyer’s choice, Wake is published by the mainstream imprint Viking. “Ninety-five percent of everybody who goes into a bookstore never goes into the science fiction section. One in twenty does. And yet I think I have things of value to say to the other nineteen.”

But no matter who his publisher is, he’ll continue writing science fiction.

“Within the confines of science fiction I have written high adventure, deeply moving personal drama, comedy, courtroom drama, medical thrillers, satire. I can’t imagine any other genre where I would be given the latitude to experiment that my publishers now only allow me to have, but expect me to exercise.”

Permanent link to this article: https://edwardwillett.com/2009/07/an-interview-with-robert-j-sawyer/