I get a box full of disease detectives!

The first sentences I rewrote today…and another photo! 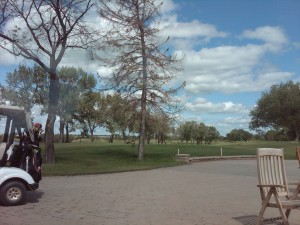 I finished rewriting the bit of Blue Fire that needed it and will be pressing on to greener writing pastures. In fact, I made a start, so today from Blue Fire I have both a first sentence I rewrote and I first sentence I wrote. Will the excitement never end?

First, the first sentence I rewrote:

“The Nightdwellers?” Petra frowned. “They’re not exactly a new–“

Then, the first new new sentence in a while:

Petra stared at the table.

See, I told you it was exciting.

Meanwhile, it’s still all rewriting all the time over at Magebane, though I got through about a 4,500-word chunk of it today and am picking up speed as I work out a few things about my world that weren’t clear enough in my own mind–or in the text–before now.

Here was the first rewritten sentence of Magebane today:

Her tutor spoke to her only about her schooling, but she wasn’t entirely uninformed about events in the rest of the kingdom.

Still working primarily at the Wascana Country Club where, after a miserably cold, gray morning, the sun came out about the time I was working on Magebane…and I took another photo with my Blackberry Storm to show the view to my left as I worked. It turned into a fairly nice day. Still awfully cool for July, though…

Permanent link to this article: https://edwardwillett.com/2009/07/the-first-sentences-i-rewrote-today-and-another-photo/