Things I Found in my Mother-in-Law’s House: 1930s paperbacks

Things I Found in My Mother-in-Law’s House (but I actually put there myself): The Army Song Book 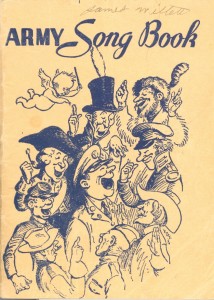 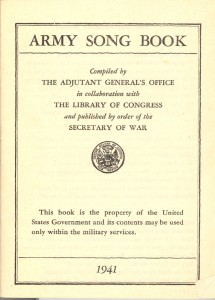 OK, this is a rather odd entry in this series because, although it dates from 1941 (pretty much the same time as the paperbacks I blogged about previously), this book was not actually found in my mother-in-law’s house: it was actually found in my mother’s house, because it belonged to my father, James Willett (whose signature appears on the front).

It’s the official US Army Song Book from the Second World War. It begins, as you’d expect, with the Star Spangled Banner (three verses!), but the complete contents is eclectic, to say the least:

It’s an interesting mixture of sentimental old favorites, patriotic  songs, and songs poking fun at Army life. I like, for one example, Bombed:

We were bombed last night, bombed the night before

And we’re going to be bombed tonight as we never were bombed before.

When we’re bombed, we’re as scared as we can be,

They can bomb the whole darn Army if they don’t bomb me.

They’re over us, over us,

One little cave for the four of us,

Glory be to God, there are no more of us

But I think my favorite part of the book is the warning you can see on the image of the inside front cover:

“This book is the property of the United States Government and its contents may be used only with the military services.”

Which means, of course, that every time since 1941 that anyone has sung “Home on the Range” or “That Daring Young Man on the Flying Trapeze” they’ve been breaking military regulations.

I’ve sung both many times myself. I feel so ashamed.

Permanent link to this article: https://edwardwillett.com/2010/06/things-i-found-in-my-mother-in-laws-house-but-i-actually-put-there-myself-the-army-song-book/