The Willetts on Wine: East is east, and west is west…but which has the best wine? 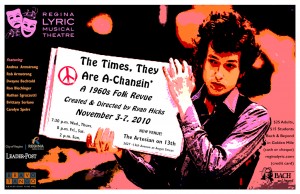 I’ve been designing posters for Regina Lyric Musical Theatre (previously Regina Lyric Light Opera) for years now. I enjoy it. It’s pretty much the only visually artistic thing I do these days, despite being an art minor in university.

Here’s my poster for this fall’s production of The Times, They Are A-Changin’, a 1960s folk revue created  and directed by Ryan Hicks, a music teacher here in the city with whom I used to sing in the University of Regina Chamber Singers.

Oh, and tickets are on sale now, if you’d like to go see the show. You should!

Permanent link to this article: https://edwardwillett.com/2010/09/my-poster-for-regina-lyric-musical-theatres-fall-show/