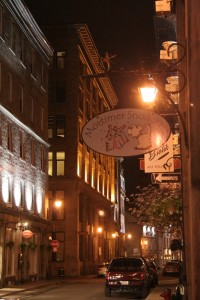 This year marks the 220th anniversary of something that grew out of the French revolution and yet sparked a revolution in my own life, and the lives of many other Canadians of a certain age, two centuries later.

I’m not talking about the guillotine, although it’s true I seem to vaguely remember a K-Tel commercial for something very much like a miniature guillotine for chopping carrots. (OK, I may be making that up, but it sure sounds like a K-Tel product!).

I’m talking about the metric system, the switch to which (called metrication) was a major feature of my teenage years, as Canada changed over and suddenly speed limits, food labels and gas pumps lost miles, ounces and gallons in favor of kilometers, grams and liters.

Although the U.S. is one notable holdout, worldwide the metric system rules: which is why any change in the way the units are defined is worth noting. And such a change may be in the offing for the kilogram.

Before I get to that, though, let’s review the creation of the metric system, shall we? (For the following information, I would like to thank the 20-years-younger version of me who wrote a column about the metric system in 1991.)

Like other European countries, before 1790 France had a system of weights and measurements that had evolved over centuries. But although the pouce and pied-de-roi were roughly equivalent to the British inch and foot, they weren’t identical. Not only that, every French province had slightly different measurement: the Parisian pied-de-roi was 11 percent longer than the one in Strasbourg, for example, and 10 percent shorter than the one in Bordeaux! (Don’t like your height? Just move!)

But then along came the French revolution, and once the storming of the Bastille and the riots and chopping the heads off of aristocrats and others was more or less over, the powers-that-came-to-be proposed a number of interesting reforms, including the 10-hour clock, the 400-degree circle…and a unified system of weights and measures.

In March, 1791, the French National Assembly accepted the proposal from the Academy of Sciences to make one quarter of the Earth’s meridian the basis for a new system measuring length. One 10-millionth of that distance became the meter. A rod of platinum was produced to represent this ideal, unchanging length, and in 1799 was itself was declared to be the standard meter.

The gram was defined as the weight of one cubic centimeter of pure water, which made the kilogram the weight of one liter of pure water. But water is obviously inconvenient to use as a standard, so once some details had been worked out, a platinum cylinder weighing the same as a liter of water at 4 degrees Celsius (water’s point of maximum density) was created in 1799, and the kilogram was formally defined as being equal to the mass of that piece of platinum.

In 1889 a new prototype, a cylinder 39.17 mm tall and the same in diameter, made of an alloy that’s 90 percent platinum and 10 percent iridium, became the official kilogram, and has been ever since. This International Prototype Kilogram, or IPK, is stored, along with six official copies, in an environmentally monitored safe in a vault on the outskirts of Paris.

The original meter rod has long since been cast aside in favor of more precise definitions. Currently, the meter is defined at the distance traveled by light in 1/299,792,458 second.

Now the official kilogram may finally be in for a redefinition, as well.

See, although by definition the official kilogram cannot weigh less than a kilogram, the fact is it’s losing mass, now varying by as much as 50 micrograms from the “national copies” held around the world. Nobody knows why, although theories include the gradual loss of the hydrogen blasted into the alloy when the cylinder was forged, or the use of coarse emory paper and cleaning fluids on it in the past.

In any event, this fall, the General Conference on Weights and Measures in Paris will begin changing the definition of the kilogram to something based on a fundamental physical constant, just like the meter is based on the speed of light. The scientific equivalent of a donnybrook is expected, because some scientists would like to define the kilogram as the mass of a certain number of silicon-28 atoms, while others would prefer to use a mass-measurement device called a “Watt balance” to define the kilogram in terms of voltage and current.

While the scientists argue, though, perhaps the rest of us, in these post-Christmas dieting days, can take heart. After all, if a platinum-iridium ally stored in a vacuum inside several bell jars can lose mass, maybe you can, too!

The photo: Old Montreal at night.

Permanent link to this article: https://edwardwillett.com/2011/01/redefining-the-kilogram/