Unrealistic expectations, and why they’re good for you 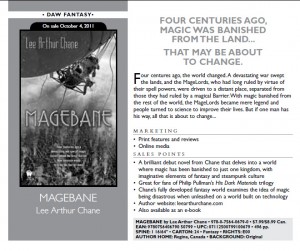 New American Library (under whose umbrella my publisher DAW Books falls) has distributed its catalogue to booksellers for its October releases, which include Magebane. This image shows the relevant page.

Four centuries ago, Magic was banished from the land…
that May be about to change.

Four centures ago, the world changed. A devastating war swept the lands, and the MageLords, who had long ruled by virtue of their spell powers, were driven to a distant place, separated from those they had ruled by a magical Barrier. With magic banished from the rest of the world, the MageLords became mere legend and people turned to science to improve their lives. But if one man has his way, all that is about to change…

Under sales points, we get:

• A brilliant debut novel from Chane that delves into a world where magic has been banished to just one kingdom, with imaginative elements of fantasy and steampunk culture
• Great for fans of Philip Pullman’s His Dark Materials trilogy
• Chane’s fully developed fantasy world examines the idea of magic being disastrous when unleashed on a world built on technology
• Author website: leearthurchane.com
• Also available as an e-book

And, I’d better get to work on leearthurchane.com, ’cause there’s nothing there yet.

Permanent link to this article: https://edwardwillett.com/2011/05/magebane-marketing/