Bless me, Father Rhysling, for I have sinned…

Unrealistic expectations, and why they’re good for you 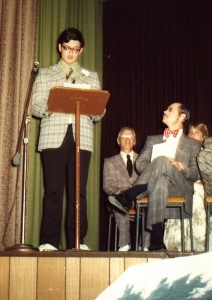 A few years ago (35 still counts as a few, right?) I was valedictorian for my high school class. This entailed making a speech. Since the theme of our class was “Climb Every Mountain” (why, yes, we had produced The Sound of Music that year; how did you guess?), my speech was based on an extended metaphor: high school as a place of mountain-climbing instruction.

I’d love to tell you exactly what I said, but I think the paper I wrote the speech on crumbled to dust long ago. Still, I’m pretty sure I expressed optimism about the future and said something about “scaling peaks” and “reaching for the sky” and so forth and so on, yada-yada-yada.

Optimism about the future is par for the course for graduation and commencement speakers…even though experience teaches us that that optimism is often misplaced. Lots of students imagine they’re going to change the world/be fabulously wealthy/be a rock star/etc., etc., etc. Very few of them actually do.

But you know what? That’s okay. Because as Tali Sharot, a research fellow at the Wellcome Trust Centre for Neuroimaging at University College London, recently wrote in an article in the New York Times, by and large, optimism is good for you.

Sharot, author of the book The Optimism Bias: A Tour of the Irrationally Positive Brain, points out that being optimistic (or, as he puts it “underestimating the obstacles life has in store”), lowers stress and anxiety, which in turn leads to better health and well-being.

Optimists, he notes, recover faster from illnesses and live longer. And, of course, if you believe there is a possibility you can achieve your dreams, you’re more likely to work toward those dreams…which, in turn, makes it more likely you actually will achieve them. If you believed your efforts were doomed from the beginning (as, sad to say, they often are), you wouldn’t even try…and trying, though it may not get you all the way to your goal, will almost certainly get you at least part of the way to your goal, and maybe that’s good enough.

Optimism seems to be hard-wired into our brains. Surveys have shown that students expect more job offers, higher salaries, longer-lasting marriages, and better long-term health than statistically they have any right to expect…even when they are fully aware of the statistics for unemployment, divorce, cancer or heart disease.

Nor is optimism a function of how well off you are or what part of the world you live in. Studies show that 80 percent of the population, without regard to age, country of residence, ethnic background or gender, has an optimism bias.

That puzzled scientists before the advent of modern brain-imaging techniques. But we now have evidence, Sharot says, that when we learn what the future may hold, our neurons are very good at encoding unexpectedly good information—but fail to incorporate information that is unexpectedly bad.

So if we hear about someone born poor who became fabulously wealthy, we think, “That could happen to me!”, whereas when we are told that the likelihood of someday being unemployed is one in 10 or the odds of suffering cancer are over one in three, we pay it no nevermind (as my southern kinfolk would put it).

Of course, there can be a down side to unrealistic optimism, as well. Underestimating risk leads to dangerous driving, failure to save for retirement, and a reluctance to undergo medical screenings.

Globally, misplaced optimism has even caused economic disaster. The financial crisis of 2008, Sharot suggests, came about because investors, homeowners, bankers and economic regulators all expected slightly better profits then were realistic. Combined, those unrealistic expectations led to a financial bubble that, when it collapsed, caused huge losses.

Sharot quotes Duke University economists Manju Puri and David T. Robinson, who like to say that optimism is like red wine: a glass a day is good for you, but a bottle a day can be hazardous.

And so, graduates, let me leave you with these inspiring words: climb every mountain, but make sure your ropes are secure, check the weather forecast before you begin, and don’t be afraid to go back to the bottom and start all over again.

Or as Sharot puts it, in words that go straight to my young adult-fantasy-writing heart, “aspire to write the next ‘Harry Potter’ series, but have a safety net in place, too.”

(The photo: Me, speechifying as valedictorian of the Class of 1976, Western Christian College.)

Permanent link to this article: https://edwardwillett.com/2011/05/unrealistic-expectations-and-why-theyre-good-for-you/