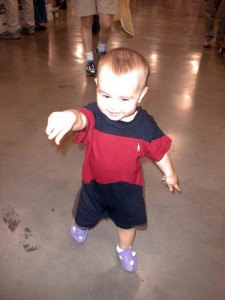 We’d like to think that we’re extremely rational beings who, when listening to someone trying to convince us of something, cannot be influenced by such superficial things as the person’s appearance or the way he or she talks.

We’d like to think that, but we’d be wrong, as any number of studies have shown over the years.

Case in point: new research conducted at the University of Michigan that found that the speed at which someone talks, the number of pauses they use, and, to a certain extent, even the pitch of his or her voice, influence how willing we are to do what they say.

The study, presented May 14 at the annual meeting of the American Association for Public Opinion Research, specifically measured how these various speech characteristics influenced people’s decisions to participate in telephone surveys, but it’s quite likely the findings hold true in many other situations as well, from conversations with our bosses to conversations with our spouses.

Jose Benki, a research investigator at the university’s Institute for Social Research, and colleagues began their study by analyzing 1,380 introductory calls made by 100 male and female telephone interviewers at the Institute. They correlated the interviewers’ speech rates, fluency and pitch with their success in convincing people to participate in a survey.

But the next finding was less intuitive. Going in, the researchers assumed that interviewers who sounded lively and animated, who used a lot of variation in the pitch of their voices, would be more successful. Instead, they found that variation in pitch only had a marginal impact.

“It could be that variation in pitch could be helpful for some interviewers but for others, too much pitch variation sounds artificial, like people are trying too hard,” Benki is quoted as saying in a university press release. “So it backfires and puts people off.”

As for pitch in general, the researchers did not find any clear-cut evidence that, when it came to female voices, altos did better than sopranos, or vice versa. They did find that higher-voice males had worse success than their deep-throated colleagues, which I, being of the bass rather than tenor persuasion, am pleased to hear (as is James Earl Jones).

The most interesting finding of all was that those who were perfectly fluent, without any pauses in their speech, were actually less successful at persuading people to take the survey than were those who paused four or five times a minute. The pauses might be silent, or “filled” (i.e., “um”).

The lowest success rates of all belonged to people who did not have those pauses in their spiels. “We think that’s because they sound too scripted,” said Benki. “People who pause too much are seen as disfluent. But it was interesting that even the most disfluent interviewers had higher success rates than those who were perfectly fluent.”

Benki and her colleagues plan to continue analyzing the speech of the most and least successful interviewers to see how the content of the conversations and the quality of their speech influenced their success (or lack of it).

You know what this means, don’t you?

Science has finally discovered why James Tiberius Kirk was the greatest Starfleet captain of them all!

And with William Shatner having just been honoured with a Lifetime Achievement Award from the Governor General’s Performing Arts Award Foundation, about time, too.

(The photo: My favorite Star Trek character of all time,  Ensign Alice, at the 2002 World Science Fiction Convention in San Jose.)

Permanent link to this article: https://edwardwillett.com/2011/05/the-shatner-effect/