My latest column for Freelance, the newsletter of the Saskatchewan Writers Guild… 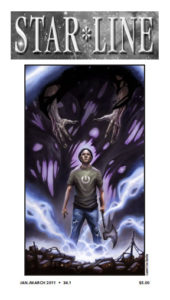 In his novel Time Enough for Love, science fiction writer Robert A. Heinlein included a number of aphorisms supposedly taken from the notebooks of his centuries-old central character, Lazarus Long. One of these I have ever since taken a kind of mischievous pleasure in sharing with poets of my acquaintance: “A poet who reads his verse in public may have other nasty habits.”

At the other extreme, there is a theoretical argument that science fiction poetry cannot even exist, because (if I’ve got the  argument right), our sense of the fantastic when we read prose arises from the narrative’s description of a reality different than our own. Poetry, this argument goes, does not describe any kind of reality, but is entirely self-reflexive: it’s about itself and its own images. This means, says theorist Tzvetan Todorov, that “poetry cannot be fantastic.”

The first is poetry concerned with science and its influence on our world. Collings’s example is “Relative Distances: Nantucket, 12.29.85” by Robert Frazier, which he says uses “the imagery and language of astronomy to explore not only the distances of outer space but also the equally frustrating distances of inner space, of relationships between father and child in a world altering faster than each can understand and in which father and child may, in some critical sense, be farther apart than the stars they watch.”

A third stream, Collings suggests, is concerned with the relationship between SF poetry and poetry at large, and works “away from traditional forms, language, and/or content, to assert the genre’s ‘alien-ness,’ its other-ness within the community of poets.”

His primary example is “Shipwrecked on Destiny Five,” a 1986 poem by Andrew Joron that, he says, “lacking consistent rhyme, patterns, traditional meter, even conventional typography, and characterized by a constant use of traditionally non-poet (i.e., ‘scientific’) diction…recreates through texture and imagery the alienation, frustration and despair of its speaker…His work creates contexts that incorporate science, fiction, and poetry, all contributing to the final effect.”

So supposing you’re a poet, intrigued by the possibilities inherent in SF poetry. Where do you go for more information?

For a fascinating discussion of SF poetry, also be sure to check out “Speculative Poetry: A Symposium,” an in-depth discussion by three poets and editors active in the field.

Inspired by my own column, let me take a stab at my own science fiction poetry:

An unpublished writer of rhyme

He stole from a poet

Who, unborn, didn’t know it.

Plagiarizing the future’s no crime!

Hmm. Maybe Heinlein really did have a point.

(The image is the cover of Star*Line, the SFPA newsletter.)

Permanent link to this article: https://edwardwillett.com/2011/06/the-space-time-continuum-science-fiction-poetry/