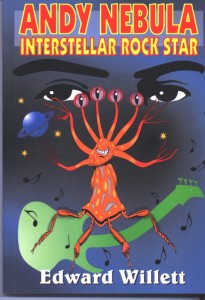 In my 1999 young adult science fiction novel Andy Nebula: Interstellar Rock Star, I postulated a future in which the hit-making machinery of the music industry has become a science, where computers are able to determine what songs, and what singers, are sure to be the next big thing.

In the book, a kid names Kit gets plucked from his hand-to-mouth existence busking on the streets of a nasty little city on a nasty little planet and turned into Andy Nebula, the next “Sensation Single,” all on the strength of a computer’s analysis of what teens want.

Looks like I might have been on to something. A new study from Emory University suggests that if you record the brain activity of teens while they’re listening to new songs, you can make a pretty good stab at predicting the eventual popularity of those songs.

The study was conducted by Gregory Berns, a neuroeconomist (no, I’d never heard of such a thing before, either) and director of Emory’s Center for Neuropolicy, and Sara Moore, an economics research specialist in his lab. The results are being published by The Journal of Consumer Psychology.

Back in 2006, as part of a study into how peer pressure affects teenagers’ opinions, Berns collected 120 songs by relatively unknown musicians without recording contracts from MySpace pages. Then he had 27 kids, aged 12 to 17, listen to the songs while their brains were being scanned using functional magnetic resonance imaging (fMRI). The teens were also asked to rate each song on a scale from one to five. Unknown songs were used to ensure that the teens were hearing them for the first time.

Three years later, while watching “American Idol” with his two young daughters, Berns suddenly heard a song he recognized from that study (“Apologize,” by One Republic), and realized that it had become a hit.

And then he had a brainstorm. “It occurred to me,” he said, “that we had this unique data set of the brain responses of kids who listened to songs before they got popular. I wondered if we could have predicted that hit.”

He went back to the data he’d collected in 2006 and ran a comparative analysis—and discovered a statistically significant correlation between the brain responses in his group of adolescent study participants and the popularity of the songs, as measured by their sales figures from 2007 to 2010: brain responses could predict about one third of the songs that would eventually sell more than 20,000 copies.

The majority of the songs were flops (as, let’s face it, most songs are), with hardly any sales at all. Only three of them were certified hits, with more than 500,000 unit sales. Interestingly, the data was even better at predicting flops than successes: about 90 percent of the songs that drew a mostly weak response from the teens’ neural reward centers went on to sell fewer than 20,000 units.

Meanwhile, the teens’ conscious ratings of the songs did not correlate with the songs’ future sales at all.

Put simply, they were probably thinking too hard: as Berns puts it, “You have to stop and think, and your thoughts may be colored by whatever biases you have, and how you feel about revealing your preferences to a researcher.” Your brain, on the other hand, is entirely honest: you can’t lie to an fMRI.

Berns is the first to admit that this research is just a “baby step.”

“I want to know where ideas come from, and why some of them become popular and others don’t,” he says. “It’s ideas and the way that we think that determines the course of human history.”

But somewhere, you know there’s a record executive already trying to figure out how run brain-scans on focus groups. Because who wouldn’t want to take the guess work out of manufacturing a hit song?

Let me save them the trouble. I have just at this moment come up with the lyrics for a sure-fire number-one hit:

“You said you’d always be my guy/You left, your brain scan tells me why/When I’m with you you always lie/But you can’t lie to fMRI!”

Permanent link to this article: https://edwardwillett.com/2011/06/predicting-hits/