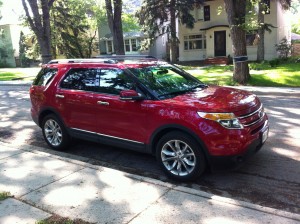 I’ve written for a lot of different magazines over the years, but there’s really only one magazine I’ve ever really wanted to work for full-time: Car & Driver.

My oldest brother, Jim, subscribed to it during the 1960s, and later my father subscribed. Eventually, so did I. For many years I read it cover to cover, during the heyday of David E. Davis (who just recently died). It just sounded like an incredibly fun place to work, making a living driving all kinds of different cars and then writing about it.

Well, I never worked for Car & Driver, and eventually I quit subscribing, as well. But I still thought driving cars and then writing about them would be cool…which was why, during my tenure as editor of Fine Lifestyles Regina, I was intrigued to be offered the opportunity to drive a couple of Ford products and then write about them. Unfortunately, my tenure as editor ended before I ever got to write about the first couple of cars, but much to my surprise, I was recently asked if I wanted to test drive a brand-new Ford Explorer for a few days and write about it on my blog. 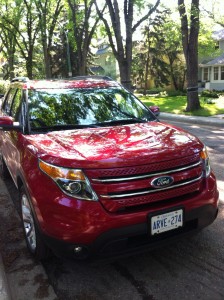 So, a couple of weeks ago I went down to Bennett-Dunlop Ford and picked up the shiny red Explorer you see in the photo. The timing worked out perfectly, since my own car was in the body shop at the time.

Now, I can’t do the full Car & Driver routine, lacking things like a test track and instrumentation to measure things like stopping distances and acceleration. But I can give some impressions.

I’m not generally speaking an SUV/pick-up driver, and I’ve always gravitated toward mid-sized cars and below. My current car is a Volvo S60.

That’s not to say that I don’t know big: we also have a 1977 Cadillac Eldorado, which is pretty much the biggest passenger vehilce ever produced, so I did have some basis for comparison. 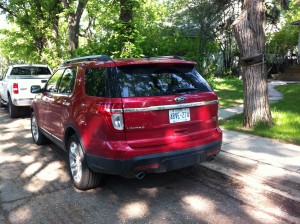 The size of the Explorer, and the fairly limited (by automobile standards) view out the rear window made me glad for one recent technological innovation that I first encountered in the Fords I’ve driven: the rear-facing camera that displays what’s behind you on a video screen located on the dashboard between the front seats. It’s particularly useful when you’re just getting used to the vehicle and don’t really have a great idea of where it begins and ends. It starts to beep at you when you’re getting too close to something behind you, beeping faster and faster until eventually it becomes a constant warning tone when you’re in danger of actually hitting something.

Once I successfully backed up without hitting anything, though, then I had to drive it without hitting anything, either. This proved to be easier than I thought. Despite its size, I found the Explorer easy to drive. In fact, it didn’t feel much harder to maneuver in tight corners than the Volvo, which for some reason has a rather large turning radius. The steering was very responsive, and once I got a handle on the visibility constraints, I felt very comfortable with the vehicle. 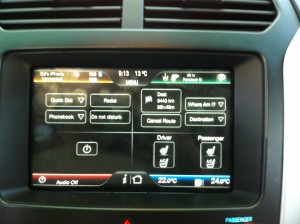 I also found that I rather enjoyed being so high off the ground. When I’m driving a car, I get annoyed with SUVs and pickups because they’re so much higher that you can’t see over them. In the Explorer, that was never a problem. I found myself pretty much at a level with the drivers of delivery trucks and looking over the top of most cars. Bushy corners and signs that cause visibility problems in cars were no problem in the Explorer, either.

The instrument panel, as you can see in the photos, is largely electronic. The large central video screen is not only the display for the rear-facing camera, but also a touch screen that controls many functions. Of course I was too cool to actually read the operating manual, so I had to feel my way around, but I found it mostly intuitive (everything except the Bluetooth connection to my iPhone, which sometimes came on automatically and sometimes I 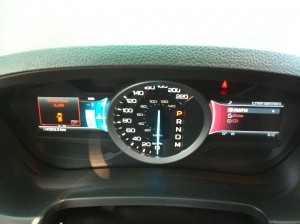 couldn’t make work for the life of me; I finally did look that up in the manual and after that had no more problems). I liked the instrument display, although I do wonder about the longevity of those video screens. Will they eventually wash out/burn out and have to be replaced? I think I still prefer clear analog dials myself.

Gas mileage seemed quite good, although I didn’t take it on any highway trips. It started with a full tank and went back with only about a quarter of it gone after five days of driving.

The seats were comfortable, and my daughter enjoyed riding around in the spacious back. And of course there’s oodles of storage space if you push down the rearmost seats, and even more if you push down all the rear seats. I kind of wished I’d had something big that needed transporting just to take advantage of it. 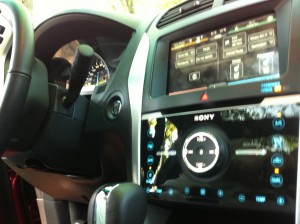 o there you go. It’s not my style of vehicle, but I still had a blast driving it. If you are looking for something large, comfortable, easy-handling and technologically advanced, by all means check out the Explorer. It may be just what you’re looking for.

Permanent link to this article: https://edwardwillett.com/2011/06/test-driving-a-ford-explorer/