You got fantasy in my reality! 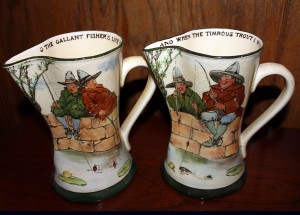 One thing we have lots of in this old house is pottery, possibly because my grandmother-in-law, Anne Owen (Nancy) Goodfellow, was from Stoke-on-Trent in England, a city in Staffordshire that is also known as The Potteries.

This week’s Retro Sunday items are two ceramic jugs I’ve noticed for years but never looked at in detail. I suppose, from the size, they were most likely used—or at least usable—as milk jugs, though I suspect they’ve never been anything but ornamental.

Made by Royal Doulton, the two jugs bear images of fisherman, and, just inside the rim, quotes related to fishing. One says, “And when the timrous trout I wait to take, and he devours my bait,” and the other, “The gallant fisher’s life it is the best of any.”

On the back there’s what looks like an old English pub sign in the shape of a fish, bearing the words “The Gallant Fishers.” Above that it says Royal Doulton, and below that, England.

Thanks to the magic of Google, it wasn’t hard to pin down both what these are and when they were made.

The Gallant Fishers pattern was part of Royal Doulton’s Series Ware, one of the pottery’s great innovations.

In fact, the concept of Series Ware predates Royal Doulton, which only became “Royal” in 1901 when it received its Royal warrant from King Edward VII. (The company began life as Doulton & Watts some 80 years earlier, and was known only as Doulton at the time it received the warrant).

Series Ware was the brainchild of Charles John Noke, who was largely responsible for making Royal Doulton the household name it is today. He joined Doulton in 1889 as Chief Designer and eventually became its Art Director. Among his many other innovations: the famous Character Jugs (we have some of those, too)..

The concept of Series Ware was to create series of ceramic items, from vases to plates to mugs, with the same theme or pattern: a concept that has obviously taken off, as anyone registering their chosen pattern for wedding presents can attest.

The Gallant Fishers was one such series. It was launched in the first half fo 1913, and production ceased around 1936—nicely dating these jugs to within a couple of decades. The Gallant Fishers series was inspired by the works of Izaak Walton (a name so similar to Isaac Newton that it’s hard not to give him a spurious knighthood and call him Sir Izaak Walton, as many sites do…or even, as one site did, conflate the two so that it appears the man who revolutionized physics also like to write about fishing).

Walton (1593-1683) was best known as the author of The Compleat Angler. First published in 1653, and added to for the rest of his life, it is a celebration of fishing in both prose and poetry.

The first quote in one of our jugs, “And when the timrous trout I wait to take, and he devours my bait” is from the poem “The Angler’s Song.” The full verse is:

And when the timorous Trout I wait
To take, and he devours my bait,
How poor a thing, sometimes I find,
Will captivate a greedy mind:
And when none bite, I praise the wise
Whom vain allurements ne’er surprise.
The second quote, “O the gallant fisher’s life it is the best of any” is from a poem of the same name, which begins:

Oh the gallant Fishers life,
It is the best of any,
‘Tis full of pleasure, void of strife,
And ’tis belov’d of many:
Other joyes
are but toyes,
only this
lawful is,
for our skill
breeds no ill,
but content and pleasure.

Fishing is, of course, a quintessential pleasure of the English countryside…and that, ultimately, is why I love these two jugs. They’re so completely and totally English: Englishness distilled, you might say, a little bit of England formed of clay from the island, painted by English artisans, made by an English company, in celebration of an English writer and an English pastime.

What can one say but, “Jolly good work!”

Permanent link to this article: https://edwardwillett.com/2013/01/retro-sunday-the-gallant-fishers/