The Shards of Excalibur series gets a new publisher 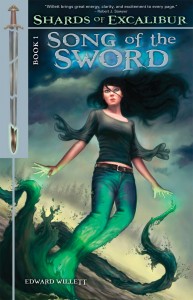 I’m thrilled–maybe even ecstatic–to announce that my five-book modern-day fantasy series with Arthurian overtones, The Shards of Excalibur, has been picked up by a new publisher, respected Regina literary press Coteau Books.

I originally sold Song of the Sword, the first book in the series, to Lobster Press, and it came out a couple of years ago (with the cover at left) to good reviews (read excerpts from some of those reviews here). Unfortunately, Lobster Press ran into difficulties and folded…just before the second book, Twist of the Blade, should have come out. (It was written and edited and ready to go.) I was anxious to find a new publisher right away, but first I had to retrieve my rights from Lobster Press. Alison Fripp, owner of the company, was singularly unhelpful, refusing to simply sign a document reverting the rights to me and forcing me to hire a lawyer in Montreal at considerable expense and actually take Lobster to court. The company didn’t even show up to contest the matter. (Others have had similar or worse experiences with Lobster Press.)

Anyway, with that’s all settled, I was free to shop the series elsewhere at last, and much to my delight, Coteau Books has agreed to take it on: all five books.

Song of the Sword will be reissued in a brand-new edition, with brand-new cover art, in May, 2014, with the rest of the books in the series to come out at six-month intervals thereafter.

Here’s the synopsis of Song of the Sword that Lobster used:

Ariane learns that she descends from the Lady of the Lake, and soon the stories she thought were legend become a real-life nightmare. She and her unexpected companion, Wally Knight, are charged with finding the scattered shards of Excalibur before Merlin can get his hands on them. The infamous magician, known in this world as software tycoon Rex Major, is trying to recover the pieces of Arthur’s sword so he can reforge it and restore his limitless power. Suddenly, Ariane’s life seems to have a purpose and a clear direction – but how can a troubled teen and her brainy sidekick outwit the ancient, ruthless sorcerer?

I’m pleased to have found a new home for the series not only because I like to have my books published, but because I’ve felt awful for all the readers–mostly young readers–who discovered Song of the Sword and enjoyed it and have been fruitlessly searching for the second book in the series since. (I know they exist because some have contacted me and others have contacted librarians who then contacted me.) Now, at last, I can assure them that they will be able to continue reading Ariane and Wally’s adventures.

I’m really looking forward to working with the fine folks at Coteau, as well, a press with a long history of publishing outstanding books. I’m very happy to be among their authors.

And, hey, Coteau is the only publisher I’ve ever worked with whose office is within easy walking distance of my house. Bonus!

(Note: I originally had the publication date for Song of the Sword as October 2014, but I’m happy to be corrected: it’ll be out in May!)

Permanent link to this article: https://edwardwillett.com/2013/08/the-shards-of-excalibur-series-gets-a-new-publisher/