I’ve turned in Faces, Book 3 of The Masks of Aygrima, to DAW! 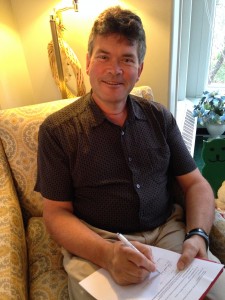 I’m pleased to announce that new publisher Rebelight, based in Winnipeg, will bring out my YA fantasy (they’re calling it “voltpunk”) Blue Fire in Spring 2015. The picture is me signing the contract.

Don’t know how they’ll describe it, but here’s how I described it in my query letter:

The Kingdom of the Twelve Cities was founded by the survivors of a war among the Twelve Gods. Only three gods survived, and made a pact that they would withdraw from the world forever. But first, each could grant to his or her followers a gift. Vekk, of the Earth, created the God Stones, sources of the magical Blue Fire, and a race of priests to guard them. Around these stones grew the Twelve Cities, drawing on their power for light and heat and protection. Arica, of the Sun, granted her followers their own use of Blue Fire: they could draw it from the sun itself, and thus were free to wander, gypsy-like, through the land, not bound to any city walls. And Silva of the Moon, in defiance of the intent of the pact, which was to leave humans to make their own way unhindered by the Gods, changed her followers into nocturnal, almost feline creatures. They have no Blue Fire, but they rule the night, slaying followers of Vekk and Arica as they find them. The result: the city dwellers huddle behind their walls, the followers of Arica must surround themselves with a barrier of Blue Fire every night or risk attack, and the followers of Silva cower in caverns during the day, unable to bear the sun, but roam freely at night.
The story: a young priest of Vekk, a girl of the wandering followers of Arica, and a boy of the Nightdwellers must work together, despite their mutual distrust of each other, when a Heretic arises who defies the will of the remaining Gods, steals the secrets of Blue Fire, and moves to take over the entire kingdom…and exterminate the Nightdwellers.
There are battles, adventures, betrayals, and even a hint of steampunk, as the Heretic uses Blue Fire to motivate and arm a tank-like device capable of destroying any army or city in its path…

It’s a bit of a dice roll, working with a brand-new publisher, but I hear good things about the people involved, so I decided to take a chance.
And for those counting, that means I’ll have five novels (at least) coming out in 2015: The Lake in the Clouds (Book 3 in The Shards of Excalibur) and The Blade Reunited (working title for Book 4 in the series) from Coteau, Falcon’s Egg (sequel to Right to Know) for Bundoran Press, Blue Fire for Rebelight, and of course Faces for DAW, Book 3 in the Masks of Aygrima trilogy.

Permanent link to this article: https://edwardwillett.com/2014/10/new-publisher-rebelight-to-bring-out-my-ya-fantasy-blue-fire-in-2015/