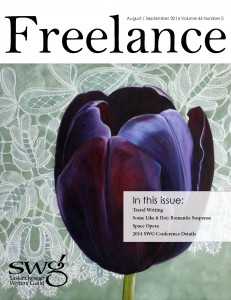 Here’s the latest instalment of my regular column on writing science fiction and fantasy from Freelance, the newsletter of the Saskatchewan Writers Guild…

“Space opera” is an odd-looking term: after all, as the marketers for the movie Alien might have (but fortunately didn’t) put it, in space, no one can hear a tenor scream a high C.

Early SF fan Wilson “Bob” Tucker coined the phrase, writing in his fanzine in 1941: “In these hectic days of phrase-coining, we offer one. Westerns are called ‘horse operas,’ the morning housewife tear-jerkers are called ‘soap operas.’ For the hacky, grinding, stinking, outworn space-ship yarn, or world-saving for that matter, we offer ‘space opera.’”

But the term that began as a perjorative is now applied to some of the best writing science fiction has to offer. How that happened is detailed in a fascinating essay by David G. Hartwell and Kathryn Cramer entitled “How Shit Became Shinola: Definition and Redefinition of Space Opera.”

The negative connotation remained in place for a long time. What led to the term’s redefinition, oddly enough, was the New Wave movement: a would-be revolution instigated in the early ’60s. Michael Moorcock and J.G. Ballard used their prestige and powers of persuasion to proclaim space fiction dead. Henceforth, they said, the only “true” SF would involve the near future, inner space, and the human mind. They and other New Wave writers lumped all past SF adventure stories, regardless of quality, under the term “space opera,” and said it was all bad and had no place in the new-and-improved SF world.

But every literary movement spawns a counter-movement. In the mid-1970s, Del Rey Books reissued nearly all of the early work of the highly respected author Leigh Brackett, and deliberately labeled that work “space opera”—as a form of praise.

Lester Del Rey had set as his publishing house’s goal nothing less than bringing SF back to its roots as a non-literary—or even anti-literary—form of entertainment. Notes Hartman, “Lester even went to the extreme of denying that any writer could set out to write SF as art,” in direct contravention of the New Wave writers, who thought SF could be good art and that good writers could aspire to art through SF—but only if they discarded the traditions of space opera.

Del Rey’s turnaround of the term “space opera” succeeded, thanks to the unbelievable success of Star Wars, for which Del Rey published the novelization. And when the aforementioned Leigh Brackett, a talented screenwriter, wrote the script for The Empire Strikes Back (generally considered the best of the original three movies), the Del Rey novelization had both the novelizer’s and her name on it. “Space opera” henceforth was linked in popular culture to bestselling popular SF entertainment.

Write Hartwell and Cramer, “Here’s the big irony: the Del Reys were conservative, and were shooting for a restoration of past virtues, and instead hit the future. What they did was to allow the postmodern conflation of marketing and art, the inclusion of media in the artistic project of SF, and to permit the mixing of all levels and kinds of art in individual works. They established the artistic environment for works they would never have considered publishing or supporting. They set the stage for postmodern space opera.”

As a result, they write, since the1980s space opera has meant “colorful, dramatic, large scale science fiction adventure, competently and sometimes beautifully written, usually focused on a sympathetic, heroic central character, and plot action [this bit is what separates it from other literary postmodernisms] and usually set in the relatively distant future and in space or on other worlds, characteristically optimistic in tone…this permits a writer to embark on a science fiction project that is ambitious in both commercial and literary terms.”

Some examples from the 1980s and 1990s I can personally recommend: Orson Scott Card’s Ender’s Game and its sequels; Larry Niven and Jerry Pournelle’s The Mote In God’s Eye; C.J. Cherryh’s Downbelow Station; Gene Wolfe’s four-volume The Book of the New Sun, and its sequel, The Urth Of The New Sun; and Lois McMaster Bujold’s Miles Vorkosigian series.

According to Hartwell and Cramer, “The new space opera of the past twenty years is arguably the literary cutting edge of SF now.”

That statement is a few years old now, but it shows no signs of being rendered inoperative. The leading contender for this year’s Hugo Award for Best Novel (after already winning the Nebula and the Arthur C. Clarke Award) is Ancillary Justice, by Ann Leckie, an unabashed space opera.

It’s ironic that a term intended as an insult to the worst science fiction now applies to the best. But then, science fiction is all about change—so maybe that’s absolutely fitting.

Permanent link to this article: https://edwardwillett.com/2014/09/the-space-time-continuum-space-opera/