‘Twas the Nocturnal Time of the Preceding Day…video edition

The Lake in the Clouds now has its Amazon page! 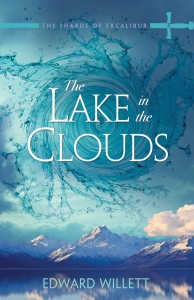 The Lake in the Clouds, Book 3 in The Shards of Excalibur series from Coteau Books, now has its Amazon page. Here’s the description:

In the third instalment of this modern take on Arthurian legends, Ariane – descendant of none other than the Lady of the Lake herself – is on the run and on her own. Using her powers to keep avoiding Rex Major’s agents makes her too weak to detect the next Shard of the broken sword she must reunite. And her erstwhile best friend and sidekick Wally has switched allegiance and is living a pampered life at Rex Major’s right hand.

Perhaps worst of all, the powerful Rex (aka Merlin) has the biggest network in the world, and has used it to find Ariane’s Aunt Phyllis – her mother’s sister, and the person she’s closest to.

With her aunt under threat, Ariane has no choice but to walk straight into Rex Major’s trap. No longer using her powers to stay ahead of his spies, she can sense the third Shard. Now all she has to do is win back Wally’s friendship, protect her aunt’s life, figure out Major’s next move – oh, and get to New Zealand and safely back with the Shard whose song is beginning to call her…

That’s the Amazon.ca version. The Amazon.com version is a little shorter for some reason.

Go forth and pre-order!

Meanwhile, I’ll just double down on finishing writing the thing, since it’s going to be out in May. I’ll be turning in the manuscript this week…

Permanent link to this article: https://edwardwillett.com/2014/11/the-lake-in-the-clouds-now-has-its-amazon-page/