Sneak peek at Cave Beneath the Sea: read the first chapter!

The Space-Time Continuum: The world of fanzines 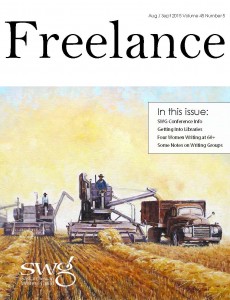 Here’s my latest column from Freelance, the magazine of the Saskatchewan Writers Guild…

Long before I ever subscribed, or even read, a copy of a professional science fiction magazine, I was reading—and even drawing illustrations for—science fiction fanzines.

In those pre-Internet days, fanzines filled the place today taken by Tumblr and Instagram and myriad other social media sites, allowing fans of science fiction in general, or particular genres (or sub-genres, or sub-sub-genres) of science fiction, to connect with the likewise-interested…likewise-interested who could be very hard to come across in, say, your average small-town (and sometimes small-minded) high school.

I began by reading Star Trek fanzines (probably because I’d read about them in The World of Star Trek by David Gerrold, and in the now long-forgotten hiatus between Star Trek: The Original Series, and Star Trek: The Motion Picture, Star Trek fans were starved for fresh Trek); then read for a while a fanzine devoted to the Darkover books by Marion Zimmer Bradley; then added one focused on the Sime-Gen stories of Jacqueline Lichtenberg.

But those were just the tip of the fanzine iceberg—and also came very, very late in the iceberg’s formation: fanzines go back almost to the beginning of the genre.

A good brief overview of science fiction magazine/fanzine history appears as an online exhibit at the website of the University of Maryland, Baltimore County, which has several special collections of early pulp magazines and comics.

“Fanzine” is, of course, a portmanteau of “fan” (short for “fanatic”) and “magazine.” UMBC defines fanzines, accurately, as “amateur or hobby magazines which are often produced, edited, and published by fans of a specific genre for entertainment and/or use by other fans.”

Fanzines arose because of the explosion in popularity of science fiction pulp magazines like Amazing Stories, Thrilling Wonder Stories, Astounding and Weird Tales beginning in the 1930s. It’s an interesting and oft-made observation that science fiction and fantasy readers are far more likely to want to join the ranks of published authors of their genres than, say, your typical mystery or romance reader. The desire to write science fiction, and to talk about it with other fans of the (rather disreputable) genre produced the first fanzines: magazines written, produced, and distributed by fans who were not involved in professional publishing.

As you’d expect from amateur writers, illustrators, and publishers, fanzines weren’t always of the greatest quality, either literarily or physically. (For one thing, the mimeograph was pretty much the only cheap printing method available.) But fanzines flourished because of the social aspect: they would often include mailing lists and addresses, so fans could communicate with other fans (and sometimes with professionals). Fan meetings could be organized, new fans recruited, and fan writing could find an audience. As science fiction conventions began (the first World Science Fiction Convention was held in New York City in 1939; the 73rd took place in August in Spokane), fanzines grew in reach and popularity.

Most fanzines were short-lived—they had a way of eating money and time. But some continued for years. And, yes, more than a few writers began in fanzines and eventually rose to the professional ranks (although the UMBC presentation linked above is wildly inaccurate in suggesting J.R.R. Tolkien, Robert E. Howard, and Edgar Rice Burroughs were among that number—Robert E. Howard died before fanzines really took off, Burroughs began publishing professionally long before they existed, and Tolkien probably never heard of them until the 1960s when The Lord of the Rings hit college campuses in the U.S.).

Printed fanzines still exist today, but most existing fanzines have gone online. The Hugo Awards, and Canada’s own Aurora Awards, both continue to offer awards for fans as well as professionals—best fan writer, best fan artist, etc.—an indication of how important fan activity has always been to the field.

My favorite fanzine is Ansible, run by Dave Langford in the U.K.: as of August 2015, it was up to issue 337. (My favorite Ansible feature is “Thog’s Masterclass,” in which Langford compiles some of the more wince-inducing prose to be found in science fiction and fantasy—sometimes by very well-known authors. In some future column I’ll collect my favorite examples. Fortunately, my own work is not among them…yet.)

Ansible’s site is also a cornucopia of other SF-related information, from the dates and locations of upcoming conventions to, yes, a long list of other fanzines. To explore the fanzine world—and the world of science fiction fans—further, that’s a great place to start: and, if you’re interested in writing science fiction or fantasy, it really is worth your time to check out the world of SF and fantasy fandom, from conventions to fanzines.

Yeah, I know, science fiction fans have a reputation for being rabidly focused on their particular area of interest and dressing up in wild costumes, but really, who are we to judge rabid fans in outlandish costumes?

May I remind you we live in Saskatchewan?

Permanent link to this article: https://edwardwillett.com/2015/09/the-space-time-continuum-the-world-of-fanzines/