Answering a question about how I write characters

Flames of Nevyana “a wonderful YA read”

Hear me read a Hallowe’eny poem 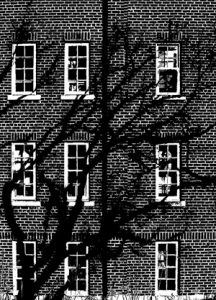 Looking for something both poetic and Hallowe’eny? (And who isn’t?) The Science Fiction Poetry Association has a page of audio files of SFPA members reading their Hallowe’en-related poems–and it includes a file of me reading “He Really Should Have Written,” one of the poems I wrote for Poet Laureate Gerald Hill’s “First Lines” project back in April. A shorter version of this poem appears in the new First Lines anthology published by Burton House Books, which launches November 24 at McNally Robinson in Saskatoon (I’ll remind you, don’t worry.)

Here’s my audio file, although I urge you to over to SFPA and listen to them all!

The image above is a photo I took (and then manipulated, obviously), which has the cheery name “The Creeping Darkness.” It’s actually a very ordinary apartment building just down the street from where we used to lie in Regina.

Permanent link to this article: https://edwardwillett.com/2016/10/hear-me-read-a-halloweeny-poem/