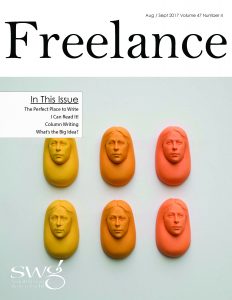 “Where do you get your ideas?” is a question every author has heard multiple times. I usually say something about how story ideas are all around us, and give some examples.

But recently I’ve realized there are two different kinds of ideas at work in a book: the idea that starts the book, and the idea at the heart of the book—what you might call the “big idea.”

Or, at least, that’s what I’m going to call it, because that’s what bestselling science fiction writer John Scalzi calls it in his popular blog “Whatever,” where for years he has generously provided a weekly spot for authors to promote new books. I recently wrote a “Big Idea” essay about my latest book, The Cityborn (DAW Books), which is what got me thinking along the lines.

I began that essay by saying that, “Some books are born from big ideas, others have big ideas thrust upon them.”

It’s another way of saying that sometimes, even though we have a little idea that gives us a book, we don’t know what the big idea at the heart of the book is until we’ve worked on the book for quite a while. The authorial process (at least for me) is often as much a process of discovery as it is of ex nihilo creation.

Oh, I had a good science fiction premise, a fast-moving plot, interesting characters, and a (I hope) fascinating setting. I’d had the idea for the book, I just hadn’t discovered the idea within the book.

The initial idea came (as is true of a lot of my books) in the form of a striking image: that of a young man scavenging for survival on a giant trash heap, outside a great city.

My process for building a novel from such an idea is similar to that of an oyster crafting a pearl around a piece of grit. I ask myself questions: “Why did that rubbish heap form? How big is it? What kind of city created it? Why are some of them reduced to scavenging? Who rules this city? Why do they allow this to continue?” My answers gave me the skeleton of my story.

This process is the same even if the initial idea takes the form of something other than an image. The classic seed for science fiction stories, after all, is “If this goes on…”: looking at something happening now, whether sociological, technological, or scientific, and projecting what it might mean in the near or far future. In that case, the series of questions might begin with, “Who is helped by this?” and “Who is hurt by this?”, a good way to disc

over the conflict and characters that lie at the heart of the potential story.

But no matter how much plot-development and character building I do before I start writing a story, the writing process itself has a way of changing it. To return to The Cityborn, even though I had a complete synopsis and knew exactly where the plot was going to go, it wasn’t until I started writing the characters, exploring not only the world in which I had placed them but their thoughts and feelings, that I finally twigged to what the story was about.

In fact, it came to me in a literal epiphany, one morning while I was writing in Atlantis Coffee in downtown Regina (a favorite haunt of mine). What makes my characters unique within the world they inhabit is that they were literally designed (with genetic modification and the injection of microscopic robots into their bloodstreams, this being science fiction) to fulfil a certain role. You might say they’re predestined, in a way even John Calvin never dreamed of.

What I realized that morning was that the big idea at the heart of The Cityborn was just another, albeit higher-level, question: namely, can individuals break the chains forged by the circumstances of their birth, the way they are raised, the expectations and restrictions placed upon them by their society?

Once I had that question in mind, all of my subsequent writing and revision worked to strengthen my answer to it: which (it won’t come as a surprise to anyone who has read my other books) was a resounding “Yes!”. The value of individuals, the importance of individual liberty (and individual responsibility) is a “big idea” that runs through many of my stories—but it’s particularly central to this one, and in a way, it seems so obvious it surprises me that I didn’t twig to it sooner.

Permanent link to this article: https://edwardwillett.com/2017/08/the-space-time-continuum-whats-the-big-idea/