Last weekend my wife and daughter and I made our annual pilgrimage to When Words Collide in Calgary, which has become, not only my favorite writing conference, but, I think, the best writing conference in Canada. (Admittedly, I haven’t been to all of them, but I don’t see how any of them can be appreciably better!)

There are panels on every aspect of writing, and even though many of them are aimed at writers who are just starting out, there are plenty of others of interest to more experienced writers. This year, I particularly enjoyed Tawny Stokes’s panel on pitching books to TV/movie production companies—something I intend to pursue more aggressively—and hearing the talks of the guests of honour: Jennifer Estep, Sam Hiyate, C.C. Humphreys, and Guy Gavriel Kay. (Will Ferguson was also a guest, but was only able to attend for one day, and missed the Friday night session where the others spoke.)

For my part, I gave two presentations. One involved leading attendees through the Seven-Sentence Short Story plotting exercise (created by James van Pelt), which I’ve done about four years in a row now, and which has proved quite popular. (My own example this year wasn’t one of my best efforts, so I’ll spare you reading it.)

I also gave, for the first time, a presentation called “Working with DAW Books,” in which I outlined my own rather unique journey from published-on-a-small-scale to published-by-one-of-SF-and-fantasy’s-major-houses. Someone commented that it seemed a rather narrow focus for a presentation, but while of course it was specifically about working with the wonderful people at DAW (the “DAW family,” as it’s known, is an accurate description, not hyperbole), it was also about, in general, the process of working with a major traditional publisher: editing, copyediting, proofreading, cover art, etc. It must have been reasonably interesting: someone told me a later a friend of theirs said it had been their favorite presentation of the convention to that point.

One regular feature of When Words Collide is what’s known as “Live-Action Slush.” A panel of editors listens to readings of the opening pages of stories submitted anonymously, each editor putting up a hand if they would have stopped before the end of the page is reached, then explaining why or why not they put up their hands.

There are science fiction panels, fantasy panels, YA panes, romance panels, etc. I love being the reader, and this year did two: historical novels, and a very special one where the panel wasn’t made up of editors, but of kids aged 11 to 16. (One of the 16-year-olds was my daughter, Alice.) We didn’t have that many writers submitting work to it (which astonishes me—seems to me kids’ feedback is the most valuable of all) so I bravely read a page from my own middle-grade work-in-progress, and did indeed get some excellent feedback, including a critical comment from Alice, which I appreciated. (No, honestly, I did!)

Another regular feature at the convention I always try to be part of is “Writers at the Improv.” This is hosted by IFWA, the Imaginative Fiction Writers of Alberta, and they’ve been doing it since way back when I used to go to ConVersion, a now-defunct Calgary science fiction convention. Normally teams of two join forces to craft sentences using words provided by the audience, creating a story over the course of the hour, with the teams competing to get the most sentences into the final product. This year I was a team unto myself, competing with two two-person teams of IFWA members.

The resulting stories are always…unusual. This year’s began with a velociraptor chasing a velocipede down a vellum-covered roadway, and ended with everyone being taken bodily into heaven. So, of course, the final title was “Velocirapture.” (Which, it turns, out, is the name of a five-piece “adventure prog” band from Florida. Who knew?) 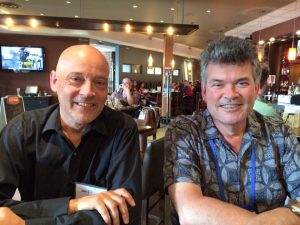 Besides the programming, When Words Collide also offers an opportunity to catch up with old friends and fellow writers, like Robert J. Sawyer, my fellow DAW family member Gerald Brandt (as seen in the photo, taken by Rob Sawyer), and Liz and Hayden Trenholm, who used to live in Calgary and now live in Ottawa: Hayden owns Bundoran Press, which brought out my titles Right to Know and Falcon’s Egg.

You also make interesting new connections, and, hopefully, pick up new readers: there’s a mass autograph session, opportunities to sell books in the dealer’s room, room parties hosted by publishers and others, and more.

If you’re interested in writing in any genre, you should be going to When Words Collide. They cap attendance at 700 or so and it fills up every year, so register earlier rather than later—and maybe I’ll see you there next year.

Permanent link to this article: https://edwardwillett.com/2017/08/when-words-collide-2017-canadas-best-writing-conference/