I wrote this article for Refined Saskatoon; you can see it in the context of the magazine here. Back in 2007, I performed with Tim in Beauty and the Beast at Persephone Theatre in Saskatoon, the very first show in the then brand-new theatre. (Our Beast was Paul Alexander Nolan, currently heading to Broadway again in the Jimmy Buffett jukebox musical Escape to Margaritaville; I profiled him here.) 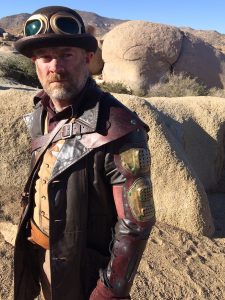 When Tim Hildebrand was in Grade 1 in Caronport, he longed to get to Grade 5, so he could be in an “actual play”—the annual Christmas pageant.

“I remember waiting for four years just to get a chance to be in that play,” he recalls. “I got this little singing solo, the crowd really clapped, and I was just ecstatic. It was the most exhilarating experience I’d ever had.”

That love of performing has led him to a professional acting career, first in theatre in Saskatchewan, and now in movies, TV shows and commercials, and taken him all the way from Caronport to Los Angeles.

But oddly enough, it wasn’t his first choice. In high school he was mostly into athletics, and when he graduated he embarked on an education degree at the University of Saskatchewan.

However, he chose drama as one of his teaching subjects, and in drama classes he realized “these are the people I love spending time with.”

He switched to a degree in theatre, graduating in 2002. “Tibor Feheregyhazi (the late artistic director of Persephone Theatre) took me under his wing, and gave me seven or eight roles at the Station Arts Centre in Rosthern and at Persephone very quickly out of university. More than anybody else, he guided and launched my professional career.”

Hildebrand branched out to other western Canadian theatres, including Shakespeare on the Saskatchewan and Rosebud Theatre in Rosebud, Alberta, but he also felt a call to give back to society, and so in 2006 he stepped back from performing to coordinate the much-lauded Performing Arts for At-Risk Youth program at Family Service Saskatoon.

When he decided to return to full-time acting in 2013, he began doing a lot of auditions, one of which was in Florida for the New York Film Academy, which offers a Master of Fine Arts degree in film acting. His audition netted him a $10,000-a-year scholarship, which he used to obtain his MFA at the Academy’s Los Angeles campus.

He used his time in L.A. well, not only obtaining his degree, but learning the city and building valuable relationships with casting directors and others. His L.A. acting career began in the theatre, when he landed the role of Mark Rothko in Red, “a two-person, intimate play that went really well.”

That was followed by a role in The Engine of Our Ruin at the Victory Theatre. The play was a Los Angeles Times Critics’ Pick, and made several top-10 drama lists. Film and TV roles began to come Hildebrand’s way, including the lead detective in an episode of Deep Undercover, the lead in a pilot for the SciFi Network called Declassified Encounters, and roles in “a flurry of small independent films,” the “funnest” of which was Bid, about corruption in the Mafia-controlled construction industry in Brazil, which entailed his first-ever trip to South America.

Last year, Hildebrand appeared in three small films that were accepted into the Cannes Festival: Departure, a prison drama; Adam and Miriam, a film about the Holocaust, and Embrace, “a small film about an estranged father and daughter meeting in a restaurant to decide their future,” which he also wrote.

This summer Hildebrand is back in Saskatoon, auditioning for shows locally, while he works to renew his visa so he can return to L.A. this fall and continue to grow his career.

What’s he looking for? “Solid feature film work, with good scripts and good co-workers. The thing that gratifies me the most is working with talented people.”

He’s already worked with many, including (a career highlight) Irma P. Hall, whom he considers one of the great character actors of all time, in a small independent film, and more recently, on a commercial, Sean Hayes from Will and Grace (below). 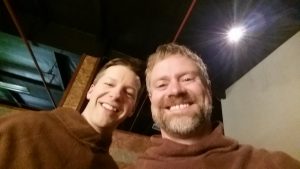 But he’ll always remain a Saskatchewan boy at heart. “My parents taught at a Bible college,” he notes. “The values they instilled in me have evolved as I’ve gotten older, but those core values have really stayed true.”

That solid Saskatchewan grounding has helped him stay true to himself in Los Angeles, where, he says, there is “tremendous pressure” to conform, both in physical appearance and in philosophical bent.

“I think the world is hungry for grounded perspectives,” he says. “With all the anger and vitriol and the accusations flying back and forth, to be a sensible, grounded person is in demand and is appreciated.”

More and more, Hildebrand sees acting as an opportunity to share what he’s learned about life. Every script has some kind of message, he notes, and says, “It’s become more important to me to find messages I can actively endorse: pro-social things, inclusion, openness, joy, love, the things that a lot of us believe in in theory but find hard to practice.

“As actors, we are in the business of implanting ideas in people’s minds,” he concludes. “It’s a sacred trust.”

Permanent link to this article: https://edwardwillett.com/2017/08/tim-hildebrands-acting-career-stretches-from-caronport-to-cannes/