Cover reveal: Paths to the Stars, my short-story collection 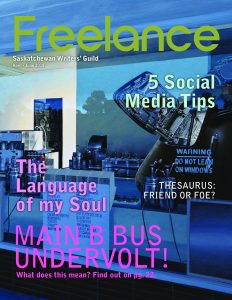 Here’s my latest column from Freelance, the magazine of the Saskatchewan Writers Guild.

All forms of art, from the visual to the theatrical, from motion pictures to literature, tend to go through movements. One reason for this is simply copycatting, something that is most clearly seen in the motion picture industry: somebody makes a movie about, say, competitive cross-stitching, and it’s such a hit that suddenly there are a dozen more films about the cut-throat world of fabric-related competition. Another reason is conversation: artists within the same genre naturally react to, protest, and comment on the work of others within their genre.

But sometimes, and especially in science fiction, it’s because it’s “steam-engine time.”

The phrase was coined by Charles Fort (1874-1932), who researched and wrote about weird, inexplicable phenomena—showers of snakes, spontaneous human combustion, floating balls of light, encounters with monsters, that kind of thing. His books were very popular, and to this day there are “Forteans” who continue to collect and investigate accounts of these anomalies.

In his third book of oddities, Lo!, published in 1931 (which, as Wikipedia puts it, detailed “mysterious falls of animals and strange materials, flying stones, poltergeist activity, etc. and incorporated these strange phenomena into his new theory on teleportation, saying that teleportation from the Super-Sargasso Sea can explain these phenomena”—because, why not?), Fort wrote, “A tree cannot find out, as it were, how to blossom, until comes blossom-time. A social growth cannot find out the use of steam engines, until comes steam-engine time.”

In the science fiction field, “steam-engine time” is a handy shortcut for the phenomenon of multiple writers suddenly and more-or-less independently producing stories built around the same idea. In a 2011 interview in The Paris Review, Canadian author William Gibson talked about how he came to coin the word cyberspace (it first appeared in his story “Burning Chrome,” published in Omni in 1982, then really took off with the publication of his 1984 novel Neuromancer). It was, he said, “steam-engine time” for the idea of cyberspace.

“It’s called steam-engine time because nobody knows why the steam engine happened when it did,” Gibson said. “Ptolemy demonstrated the mechanics of the steam engine, and there was nothing technically stopping the Romans from building big steam engines. They had little toy steam engines, and they had enough metalworking skill to build big steam tractors. It just never occurred to them to do it. When I came up with my cyberspace idea, I thought, I bet it’s steam-engine time for this one, because I can’t be the only person noticing these various things. And I wasn’t. I was just the first person who put it together in that particular way, and I had a logo for it, I had my neologism.”

The resulting sub-genre of cyberpunk is hardly the only example of “steam-engine time” within the field. The idea of manned spaceflight, still closely associated with science fiction, was another that many people were drawn to all at once.

When I read science fiction short stories religiously, in the 1980s and 1990s, one topic that sprouted several stories was the threat to civilization posed by the coming ice age (remember, in the 1970s scientists were predicting global cooling, not warming). These days, of course, there are so many stories about civilization facing the challenges of a warming planet that they’ve spawned their own (rather unattractive) neologism: “cli-fi.”

Nanotechnology and virtual reality have all had their place in the sun. And you could say it literally became steam-engine time again with the advent of the popular sub-genre of steampunk.

Science fiction, I think, is particularly prone to the flowering of multiple stories built around the same themes because it is driven by scientific, technological, and social developments in the real world. The classic science fiction idea-generator, after all, is “If this goes on…”

In fact, “If This Goes On—” was the actual title of a classic science fiction novella by Robert A. Heinlein. Serialized in 1940 in Astounding Science Fiction, and included in revised and expanded form in his 1953 collection Revolt in 2100, it’s about a theocratic dictatorship taking hold in the United States. A backwoods preacher, Nehemiah Scudder, is elected president in 2012…and there are no more elections after that. The theocracy is established and maintained through the combination of mass communications (just taking hold when Heinlein wrote), applied psychology, and a hysterical populace.

While some of the upwelling ideas that produce clusters of similar stories eventually fade, overtaken by events, others continue to percolate inside the field. Nanotechnology, artificial intelligence, robots, genetic engineering, environmental concerns, terrorism, mass migration, and many other technological and social developments continue to spark ideas, and thus stories, from today’s science fiction writers.

Science fiction isn’t about predicting the future (and when it tries, it almost always gets it dead wrong), but it is very much about the fact that tomorrow will not be like today. Whenever enough threads come together in the real world to point to amazing (or alarming) developments down the road, you can bet science fiction writers will begin putting the pieces together—and once again, it will be steam-engine time.

Permanent link to this article: https://edwardwillett.com/2018/03/the-space-time-continuum-steam-engine-time/