Things I Found in my Mother-in-Law’s House: Vices

Notes for this week’s CBC column (which you can listen to here):

Ed Willett has been exploring the recesses of the house that has been in his wife’s family for 70 years…and this week has uncovered shocking news: people in the past used to smoke cigarettes.

Also, they were known to drink alcohol on occasion.

I joined Ed in his house this morning to examine the evidence.

Ed, I know you don’t smoke. So what’s with all these lighters and cigarette cases?

Smoking was once much more socially acceptable than it is now, so even if you didn’t smoke (though Sam Goodfellow, my grandfather-in-law, did), you had to have the paraphernalia of smoking in your house to accommodate all your smoking friends. I grew up in a completely non-smoking house, with parents who frowned on smoking by anyone, but we still had an ashtray or two just in case when I was little.

And of course, you had to have lighters. And I see you have two of them here. 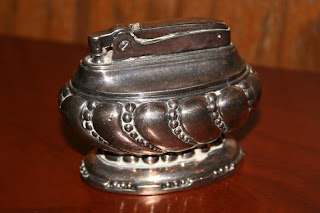 Yes, and they’re quite different, though probably not separated by all that many years.

This is a silver-plated Ronson Crown table lighter, and it probably dates from the 1940s or 1950s.

Ronson, originally known as The Ronson Art Metal Works, was formed by Louis V. Aronson in 1886 in New York City, but it moved just a year later to New Jersey, where it still operates.

It didn’t make lighters to begin with, because the modern cigarette lighter didn’t exist. It was born with the invention, by Austrian chemist Carl Auer Freiherr von Welsbach, of an alloy, 70 percent cerium and 30 percent iron, that gives off sparks when scratched or struck. Although it doesn’t have a bit of flint in it, that’s what it’s called today.

Ronson began producing its first pocket lighter, the Wonderliter, in 1913, and a few years later received the first patent for an automatic lighter–one that you press and it lights, and you release it, and it goes out–the mechanism this lighter uses. (For some reason, they called this the Banjo.)

Ronson continued to develop new lighter technologies and it and other manufacturers competed to produce the most glamorous lighters. Since almost everyone smoked–doctors and nurses in hospitals, customers in stores, you name it–it was a lucrative niche, but the company also made book ends, busts, lamps, paper weights, trophies, wall plaques–all kinds of decorative metal objects.

What about that other lighter? It looks much more modern–in fact it looks like a golden skyscraper. 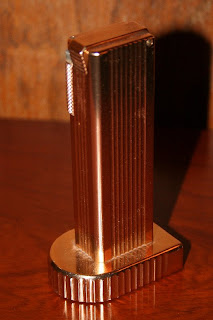 This one is definitely post-Second-World-War, because it’s made in Japan. I think you call this style Art Moderne. It probably dates to the 1950s, but I haven’t been able to learn anything about the company that made it: Cygnus. Unlike the old Ronson, though, the flint still sparks!

Both of those are quite…well, glamorous, I guess. We don’t tend to think of cigarette smoking as glamorous any more.

No, but it was certainly seen that way at one time. Which is why, in addition to fancy lighters, manufacturers turned out beautiful objects like this cigarette case: silver plated, lined with cedar, monogrammed on top. (W.H.A. stands for William and Alice Hodges, my father- and mother-in-law.) The bottom reads Aristocrat–playing up the glamour angle, again–and has the initials H.E.P.N.S.B., along with the notice, “Made in England,” and your guess is as good as mine what H.E.P.N.S.B. stands for. The 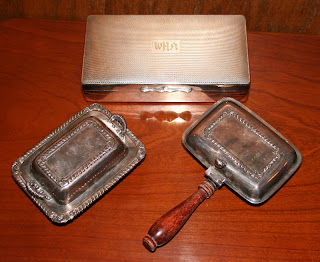 best I could come up with was Here: Enjoy Pretty Nice Smoking Box, but I suspect that’s not correct.

There are a couple of other cigarette boxes–at least, I think that’s what they are. One is a small silver-plated box with a lid, like a miniature serving dish, and the other has a wooden handle and a flip-top box, so you could (I presume) offer your guests a cigarette without touching it.

Wouldn’t want to pass around any germs and endanger anyone’s health with their cigarette, after all!

I can’t make out the mark on the bottom of the wooden-handled one, but the other says 1847 Rogers Bros. on the bottom.

The Rogers Brothers, Asa (obviously once a much more common name–I had an Uncle Asa), Simeon and William established a shop in Hartford, Connecticut, in the 1840s to sell wares made using the new technology of electroplating: placing a thin coat of silver over a base metal. 1847 was the year they felt they had perfected the process.

In 1862 they moved to Meriden, Connecticut, the center of the Britannia ware industry. Britannia ware was an alloy that resembled pewter that could be cast into fancy decorative articles, then plated.

Rogers Bros. was eventually absorbed by the Meriden Britannia company, along with many other silverware makers. It became the International Silver Company. The 1847 Rogers Bros. trademark continued to be used. In fact, it’s still being used, so the date tells me nothing about how old the cigarette case is, unfortunately. 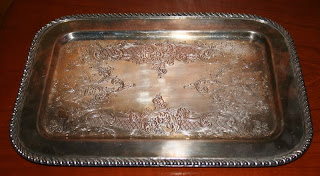 Interestingly, all this stuff sits on a silver-plated copper trade that also says Rogers on the bottom–but this is Wm. A. Rogers, and that’s actually yet another different company, even though all these items look like they belong together. This Rogers was a master American silversmith and a pioneer in the silverplate industry, whose name has been passed on through various companies since his death in 1873. Wm. A. Rogers on the bottom of this platter means it was likely actually made by Oneida Silver, which acquired the mark in 1929.

Oneida is an interesting company in its own right: it arose from a 19th century Utopian Society founded in 1848 in Oneida, New York, by John Humphrey Noyes. Noyes had come up with his own unique Christian theology, called Perfectionism, based on the values of self-perfection and communalism (which extended to something called “complex marriage”: every man and every woman in the community was considered married to each other.) The community manufactured a number of items, including silver knives and forks and spoons. It was disbanded in 1880, but members re-organized as a joint stock company called the Oneida Community, Ltd., which eventually gave rise to Oneida Silversmiths and the Oneida Ltd. company that is still functioning today. 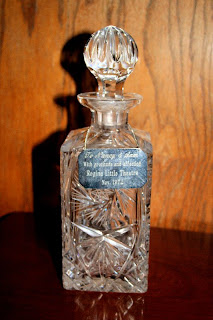 Let’s move from smoking to a different vice: alcohol. Any interesting discoveries there?

Well, there are these lead-crystal decanters. Beautiful, but you wouldn’t dare use them now: scientists discovered in the early 1990s that tiny amounts of lead begin to migrate from lead crystal into win within a few minutes after the wine is poured, and large amounts can collect in wine that’s stored in them. So we just look at them. I like this one, though: it has a plaque on it thinking Sam and Nancy for their many contributions to Regina Little Theatre. 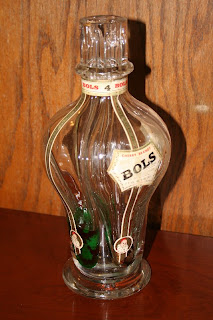 Then there’s this odd object: a liqueur bottle with four separate containers inside it. It’s a Bol’s 4, and it was a promotional item put out by the Bols company–which is, incidentally, the world’s oldest distillery, founded in Amsterdam in 1575–in the 1970s. It contained apricot brandy, creme de menthe, curacao triple sec and cherry brandy, with each section of the bottle stoppered with its own little cork. Alas, nothing is left of the liqueurs except for what looks like some green jelly in the bottom of what was presumably the crème de menthe section. 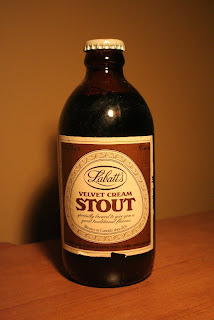 There’s this Canadian classic: a brown stubby unopened bottle of Labatt’s Velvet Cream Stout. Neither the beer–a type which won a major beer competition in Belgium for Labatt’s in 1958, the year before I was born–or the bottle, which ruled from 1961 to 1984, is still being made.

And finally, there’s this. 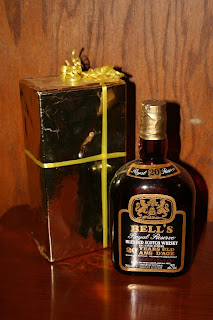 Unopened, but I know what’s in it: a bottle of Bell’s 20-year-old Royal Reserve blended Scotch whiskey. It was a favorite of Margaret Anne’s father, William Hodges–he prevailed upon the Liquor Board to bring it into the store–and for many years friends would buy him a bottle for Christmas. This one still hasn’t been opened. Bell’s Scotch Whiskey is still being made, but not the 20-year-old Royal Reserve.

I think it’s the perfect toast for this house, and everyone who’s lived in it.

Permanent link to this article: https://edwardwillett.com/2008/10/things-i-found-in-my-mother-in-laws-house-vices/