What I Just Read: City of Ashes 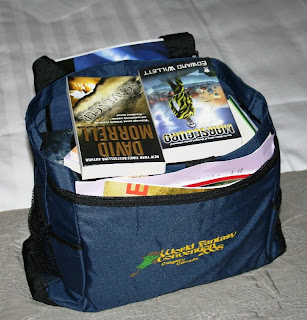 I arrived in Calgary about 1 p.m. today for the World Fantasy Convention, registered, and picked up the book bag. Holy library, Batman! Look at this thing.

And yes, that is a copy of my very own novel Marseguro on top: DAW graciously provided 300 of them for giveaway at this con. Which I hope means someone will at least stop by for an autograph at tomorrow’s mass autograph session.

I had some lunch, met up with all kinds of people I know from here and there, checked out the dealer’s room (where I put my books among the many other worthy titles on the SF Canada table), checked out the rather small art show, and eventually hooked up for dinner with a bunch of (primarily) IFWits, as members of the Imaginative Fiction Writers Association here in Calgary are known. We went to the Bear Kilt pub, just half a block from he hotel. 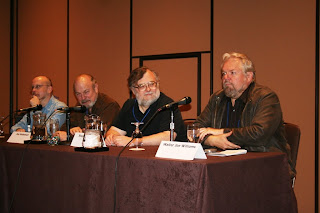 Robert J. Sawyer was part of the group, and headed off a bit ahead of us to get ready for a panel at 8 p.m. on science fiction tropes in fantasy (or possibly fantasy tropes in SF), entitled “Aargh! My alien is an elf!” Besides Rob, panelists included Joe Haldeman, S.M. Stirling and Walter Jon Williams, and if the topic was quickly exhausted, the interesting conversation was not. Joe Haldeman compared Star Wars to Hiroshima in its effect on science fiction and warned of the coming hordes of human-herding networked insectoid robots (I’m paraphrasing), Rob Sawyer urged writers not to worry about their fiction being dated if they include details of the real world, because realistically, most fiction has a short shelf-life anyway, S.M. Stirling came up with a new, much less succinct but certainly descriptive name for the Mundane Science Fiction movement, and Walter Jon Williams tried to keep things moving along as moderator, with minimal success if the goal was to stay on topic, but much merriment (mixed with existential despair), nevertheless. 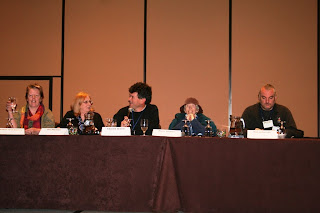 I took a break to phone home, then an hour later (who starts a panel at 10 p.m.?) it was time for the panel I moderated, on “Canadian Fantasy: Is There Such a Thing?” Panelists, besides myself, were Candas Jane Dorsey, Ann Marsden, Marie Jakober and Karl Johanson. We agreed that there is, indeed, such a thing, talked about a few ways in which Canadian fantasy might be recognized (darker themes, more anti-heros, a fascination with and influence from landscape, more focus on characterization), but agreed (I think) that the differences were less pronounced now between fantasy from Canada and that from elsewhere (read: USA) than they once were, and also discussed particulars of the Canadian publishing scene when it comes to fantasy. A Good Time Was Had By All, as the rural correspondents for my old newspaper, the Weyburn Review, liked to say. And A Pretty Good Crowd Was On Hand, Too, for an early panel (con-wise) that was also late (time-wise).
Tomorrow I have a reading, a meeting, the autograph session and the SF Canada party. Plus, of course, there are panels and things and lots of people talk to. My DAW editor, Sheila Gilbert, will arrive tomorrow sometime, and I’m expecting to get together with her at some point over the weekend. And then there’s that DAW dinner at the River Cafe to look forward to Saturday night…yum!
*Yawn*. And now, bed.

Permanent link to this article: https://edwardwillett.com/2008/10/world-fantasy-convention-day-1/