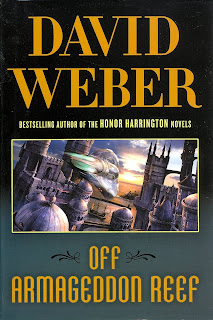 I’m a big David Weber fan (and had a chance to meet him and be on a panel with him at ConVersion in Calgary a couple of years ago)…or perhaps it would be more accurate to say I’m a big Honor Harrington fan, since nothing else he’s written has captured my interest as much as that series.

Until, I’m happy to say, now. Off Armageddon Reef has a rather incredible narrative arc, or at least implies an incredible one for the rest of the series: it starts with the destruction of pretty much the entire human race and its various planets, including Earth, by an implacable alien force, then over a couple of chapters settles down into something that could almost be a C.S. Forester novel, full of gunsmoke and galleons, except for the fact that the central character is a centuries-old android-with-a-human-personality-inside who is working on the REALLY long-term goal of preparing humanity to some day go forth and whip alien butt.

Intriguing (and also full of intrigue, of the political sort), with a huge cast of interesting characters and some marvellous action scenes, satisfying all at once my appetite for space opera, sailing adventures, skullduggery, and young-man-raised-to-greatness-by-mystical-master fantasy; really, how many books can you say that about?

Best of all: I waited long enough to read this that I’ve been able to launch straight into the sequel, By Schism Rent Asunder, and the third book, By Heresies Distressed, will be out in the summer, so I won’t have long to wait for that one, either.

P.S. (I just remembered that Weber bought a copy of Lost in Translation from me in Calgary. I wonder if he ever read it?)

Permanent link to this article: https://edwardwillett.com/2008/12/what-ive-just-read-off-armageddon-reef/