…was, once again, for Blue Fire 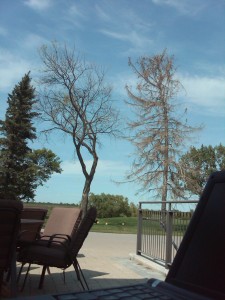 In the stunned silence that followed, Amlinn stood stock-still for a long moment, then suddenly ran after her grandfather.

That was first thing this morning; in the afternoon, I did good work on Magebane, but it was, once again, of the rethinking variety. I went back into the outline and figured out some more things that have been causing me fits. Now I really think the plot is sound, instead of scatterbrained, which is how I’ve felt it be as I’ve tried to write. That’s the good thing. Bad thing: I think I’m going to have to go back to the beginning yet again and rewrite from there to make it all come together. So, no new word count today, and the word count thus far is essentially meaningless.

Best thing about today: they put in much more comfy chairs outside on the deck at the Wascana Country Club, which meant I could sit outside in the shad with my netbook and write and enjoy the great outdoors at the same time. A very nice writerly thing to do. Sometimes I really like my “job.”

Permanent link to this article: https://edwardwillett.com/2009/07/the-first-sentence-i-wrote-today-85/