…for Blue Fire was:

Imlinn stood on the Freefolk trail leading north toward City Duodecim and studied the tracks he had found there by the light of the stars.

Good writing this morning, as a scene I hadn’t even realized I needed came to life and both told me something about a major character and helped explain a few things that needed explaining. I enjoyed it! Plus I was sitting outside on a beautifully warm morning with a cup of coffee. What’s not to love?

This afternoon I worked on Magebane, going back through it from the beginning (again) to see what I can salvage and what needs complete rewriting in view of what I really hope is the necessary plot corrections I dreamed up yesterday. 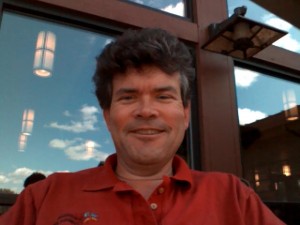 Concentration was somewhat hampered by the fact that Saskatchewan Roughrider football players, both present and past (from the 1989 Grey Cup championship team) were exchanging war stories just around the corner. Half the time I found what they were saying more interesting than what I was attempting to do. But I got some stuff done.

Today’s photo was taken with the built-in Webcam in the Samsung NC10, so that’s sort of what I looked like while I was writing, although I wasn’t always smiling like that…

Permanent link to this article: https://edwardwillett.com/2009/07/the-first-sentence-i-wrote-today-86/