Two days of writing! Photos! More excitement than you can shake a stick at! 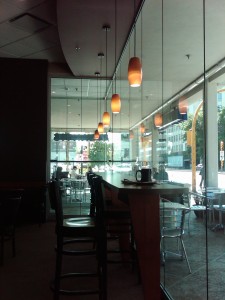 …was, again, for Blue Fire:

Amlinn slept through the night without waking and only found out about the Nightdweller patrol when she went to breakfast in the morning.

Not sure they were very successful words: my writing session, at the Atlantis coffee shop (see yesterday’s view-while-I-wrote photo, above) was interrupted by an annoying nosebleed brought on by a violent sneeze, which was brought on by…well, who knows; sunlight, probably. Anyway, the nosebleed wasn’t really anything major, but it lasted about 15 minutes and then, of course, you worry about it starting up again.

In the afternoon I was out at the Wascana Country Club again, working on Magebane.  And I know I’ve said this before, but now I really do think I’m ready to proceed onward from where I’ve been stalled–starting today, I hope!

Why, yes, I have another photo to go with the afternoon’s work, as well. 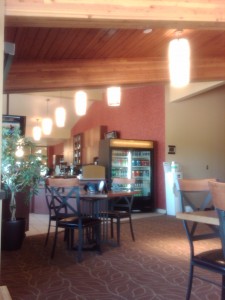 Permanent link to this article: https://edwardwillett.com/2009/07/the-first-sentence-i-wrote-yesterday-14/