Montreal WorldCon Day…um, what day is it again? 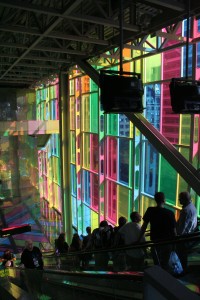 And so the World Science Fiction Convention in Montreal winds down. We were at the convention centre at 10 a.m. for me to give a reading with Alison Sinclair and Heidi Lampietti…but the only person to show up was there to hear Heidi, and Heidi, it turned out, had to stay in the dealers’ room because she had no one to look after her table there. So after waiting a few minutes, we adjourned.

And that was pretty much it for me, con-wise, except for saying good-bye to people. (Typically what happens is you say good-bye to someone, and then you end up seeing them half a dozen more times, even though you hardly saw them at all during the con.) Just about the last thing I did was pick up the books that hadn’t sold from the SF Canada table. There were far fewer than usual. All of the copies of Marseguro, Lost in Translation and Terra Insegura I had brought sold, and so did at least one Andy Nebula and a couple of Spirit Singers. Chapters had to scrounge to find any of my books, but scared up a few that also sold out. Encouraging! I just wish I’d taken more books. But usually I end up lugging almost all of them home again!

Oh, I also did a couple of interviews with CBC Radio in Saskatchewan. One of those led to this story, which has shown up nationally. (I want to state for the record that it was not I who described the Aurora Award for Long-Form Work in English as “the top prize for writing at the World Science Fiction Convention,” something I think the Hugo people might disagree with. On the other hand, I also confess to a certain small-boyish unbecoming glee at the fact that Newbery- and now Hugo Award-winning author Neil Gaiman didn’t get mentioned by the CBC and I did!)

Oh, and no, I never did get to meet Gaiman this weekend, although I saw him a few times. 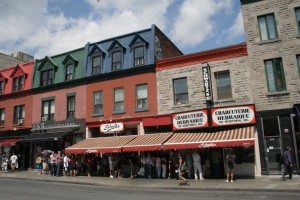 In between my non-happening reading and packing up and saying farewells was a visit to that Montreal landmark, Schwartz’s deli, for a smoked meat sandwich. It was good, no question, and the experience is unique: standing in line, crammed at a table with other people you don’t know, served a huge pile of smoked meat on bread with a dill pickle and a can of black-cherry cola…I can see how people get addicted to it.

We popped across the street for ice cream, then walked around the neighborhood–which seems to be a kind of Little Portugal–for a while before catching a bus back to the convention centre.

I had another interview with CBC Saskatchewan after we got back to the hotel, this time a live conversation on the Afternoon Edition, then we went out to eat at Le Bourlingueur, the same restaurant at which we ate last night with Sheila Gilbert and Betsy Wollheim of DAW, and one which Alice has decided is the best ever because she liked the soup (califlower) , the main course of manicotti, the salad and the desert…something that doesn’t always happen at every restaurant we eat at, I can assure you!

And now, here we are back at the hotel, looking forward to two full days of being nothing but sightseeing tourists before we heat on to Quebec City.

It’s been a great convention. In fact, for obvious reasons, I’d have to say for me it’s been the greatest WorldCon ever!

Permanent link to this article: https://edwardwillett.com/2009/08/montreal-worldcon-day-um-what-day-is-it-again/