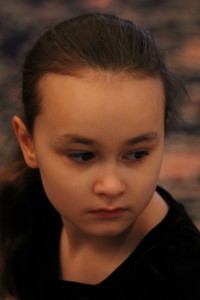 Well, that was fun.

By “that,” I mean the process of getting this new computer up and running to my satisfaction. Yes, the new monitor arrived last week, and I spent a few happy (well, mostly happy) hours with plug-ins and cables and drives (oh, my!), losing hours of productivity in order to get a device that is supposed to enhance my productivity to the point where I can actually be productive on it. But it is ever thus, and things seem to be in good working order now, with the old computer still standing by and ready to go in case I suddenly realize I’ve forgotten to transfer something I really need. (Which has already happened about three times.)

But that “that” isn’t the only “that” that I meant when I said “that” was fun. The other “that” that was fun was Regina Lyric Musical Theatre‘s annual fundraising brunch, the first of two installments of which took place on Sunday at the Hotel Saskatchewan Radisson Plaza.

I’ve been involved with Regina Lyric Musical Theatre (formerly called Regina Lyric Light Opera Society, and henceforth to be referred to simply as “Lyric” for the sake of my typing fingers), for (gulp!) more than 20 years ago.

Back when I lived in Weyburn, I was one of the founding members of Crocus 80 Theatre (formed in 1980, in case you couldn’t guess), and eventually rose to the presidency of that august community theatre troupe. When I came to Regina in late 1988 I naturally expected that my ongoing theatrical activities would be focused on Regina Little Theatre, one of the oldest little theatres in Canada…but, see, Lyric did musicals. And I sing. And so…Lyric became my primary theatrical home, rather than RLT (though I have acted in and directed RLT productions over the years).

I was almost immediately drafted to the board of Lyric, and eventually became president, and for many years, I was in every single Lyric production. I can’t say that any more, and I’m no longer on the board, but I continue to be publicity director and I also design posters and programs (oh, and look after the website). And I do perform frequently with Lyric…which is what I was doing Sunday. 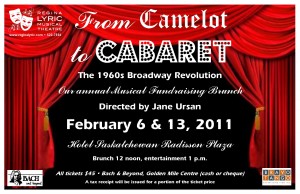 Lyric’s musical brunch is a terrific event that offers a great brunch, followed by more than an hour of Broadway-based entertainment. It’s been directed for many years by Jane Ursan (although I directed it a couple of times about a decade ago), and each year she puts together a fabulous line-up of songs, all built around a theme. Sometimes it’s been a particular composer (Stephen Sondheim, Leonard Bernstein), but this year it was called From Camelot to Cabaret: The 1960s Broadway Revolution, and featured songs from the amazing shows of that decade. The show features songs from Camelot, Bye, Bye Birdie, Do Re Mi, The Fantasticks, How to Succeed in Business Without Really Trying, 110 in the Shade, A Funny Thing Happened on the Way to the Forum, Oliver, Hello, Dolly!, Fiddler on the Roof, Funny Girl, Sweet Charity, You’re a Good Man, Charlie Brown and many more, finishing with a rousing rendition of a medley from Hair. (That medley is notable from my point of the view for the fact that I play tambourine on “Let the Sun Shine In.” Tambourines, I have discovered, hurt. The palm I banged it against was sore for a day, my right arm felt like it would fall off, and one night at rehearsal I came within about two minutes of tambourining of developing a blister on my thumb. Considering that, as someone joked the other day, the tambourine was invented so bands had an excuse to put a pretty girl on stage, the fact I’m playing it is odd, to say the least!)

It’s a fun song, and it was particularly fun because one of the the two ladies who sang it with me was my real-life lady, my wife, Margaret Anne.

And what made that special was that, although there are many reasons I am fond of Lyric, the reason that stands head and shoulders and an Everest-sized mountain peak above the others is that it was through Lyric that I met Margaret Anne.

And , in turn, means that without Lyric, I would not have my amazing, beautiful, wonderful daughter, Alice…whose picture, looking pensive, adorns the start of this post.

If you happen to be in the Regina area, I hope you’ll consider coming out to this Sunday’s repeat performance. Brunch is at 12 noon, and the singing follows at about 1:15. Tickets are $45, and available from Bach & Beyond in the Golden Mile Centre.  I’d love to see you there!

The photo: My daughter, Alice, age 9.

Permanent link to this article: https://edwardwillett.com/2011/02/biddle-dee-diddle-dee-dee/