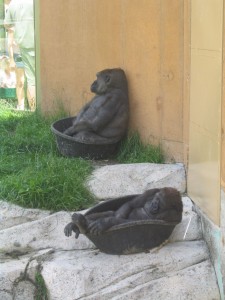 There’s a famous video (well, famous in some circles, anyway) of six people passing a basketball around. Midway through, a person wearing a gorilla suit walks through the scene.

Research has shown that when viewers who have been told to count the number of passes don’t know the person in the gorilla suit is going to appear, more than 40 percent fail to see him, even though he stops halfway across the room to briefly thump his chest.

This failure to see something unusual that’s right in front of our eyes is called “inattention blindness,” and new research has shed some light on who is most susceptible to it, and why.

The key, it appears, is the capacity of a person’s working memory, the memory we use to deal with whatever we’re doing at any given moment. If you’re solving a math problem, or working on a grocery list, you’re using working memory.

The question has been whether people with a high working memory capacity are less likely to see a distraction because they focus more intently on the task at hand, or more likely to see it because they are better able to shift their attention as needed.

New research indicates it’s the latter: those with greater working memory capacity are more likely to see the gorilla than those with less.

The research was conducted by University of Utah psychologist Janelle Seegmiller (the video was the work of psychologists Christopher Chabris and Daniel Simons, who wrote a book called, naturally, The Invisible Gorilla), along with fellow psychology faculty members Jason Watson and David Strayer. Strayer has led several studies on cell phone use and distracted driving.

To begin, 306 psychology students were tested with the gorilla video. About a third were promptly excluded because they already had some knowledge of it. That left 197, ages 18 to 35, whose test results were analyzed.

First, the psychologists measured the participants’ working memory capacity using an “operation span test” in which they were given a set of math problems, each of which was followed by a letter. (For example: “Is 8 divided by 4, then plus 3, equal to 4? A.”)

There were 75 of these equation-letter combinations in all, divided into sets of three to seven. Participants were asked to recall all the letters of each set. For instance, if a set of five equations ended with PGDAE, they’d get a full five points if they remembered the letters in that order. (Although there was a catch: to ensure they weren’t just memorizing the letter order, they also had to solve at least 80 percent of the equations correctly.)

In the next step the participants watched the gorilla video, which features two three-member teams, one wearing red shirts, one wearing black shirts, passing basketballs back and forth. Participants were asked to count bounce passes and aerial passes by the black team. At the end, they were asked how many passes of each kind they counted, and whether they noted anything unusual. To ensure they were actually counting passes, and so were focused on the task in hand, only participants who were 80 percent accurate in their pass count were included in the final analysis.

To put it in other words, those with greater working memory capacity have more “attentional control”: they are better able to focus attention when and where needed, and on more than one thing at a time.

Outside the lab, attentional control is important any time we’re trying to deal with more than one task at once. The most obvious real-world example is driving. Those with a greater working memory capacity are less likely to run a just-turned red light because they’re distracted by conversation, for instance.

It’s an interesting finding, but don’t think just because you have a higher working memory capacity, you can safely drive and talk on your cellphone at the same time. Previous research by this same team has shown that only a very few people (2.5 percent) can do so without impairment.

This probably still isn’t the whole story. At least, the Utah researchers don’t think it is: they plan to continue their research to look at other possible explanations for why some people suffer more from inattention blindness than others, including brain processing speed and differences in personality types.

Personally, I’ve always thought I’m very good at multitasking. I was doing four other things while writing this column, and I’ll bet you no close you matter how look can’t tell, can you?

(The photo: Gorillas in wash tubs at the Calgary Zoo.)

Permanent link to this article: https://edwardwillett.com/2011/04/inattention-blindness/