The vernacular of fiction 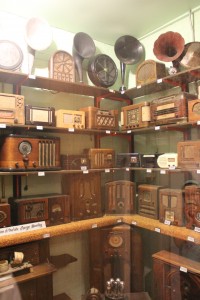 Take digital television. In fact, you’ll have to: by August 31, over-the-air television stations in most major Canadian cities are being required to stop broadcasting in analog and start broadcasting in digital.

Merriam-Webster defines analog as “of, relating to, or being a mechanism in which data is represented by continuously variable physical quantities.”

Digital, on the other hand, is defined as, “of or relating to the fingers or toes.” Wait a second, that can’t be right…oh, here we go: “of, relating to, or being data in the form of especially binary digits.”

A phonograph record is analog, the continuous, wriggly groove representing the continuously changing vibrations in the air as someone plays or sings. A CD is digital, capturing little discrete snapshots of information and storing them as binary numbers that can be read by a computer.

At the opposite end of the camera is an electron gun, which fires a narrowly focused beam of negatively charged electrons at the light-sensitive coating, starting at the top and scanning across the plate, then moving down slightly and doing it again, and so on until it has scanned the entire plate. This negative charge neutralizes the positive charges accumulated on the light-sensitive coating, creating a fluctuating current in the metallic coating.

That current, amplified and broadcast as an AM signal, sets up a matching current in the antenna of the receiving television set, whose picture tube is coated at one end with a substance that glows brightly when struck by a beam of electrons. An electron gun at the back of the tube again flicks its beam back and forth, top to bottom, its strength corresponding to the strength of the fluctuating current from the antenna, which corresponds to the strength of the broadcast signal, which corresponds to the amount of light reflected from each part of the objects in front of the camera, allowing the TV to recreate an image of those objects on the screen.

Although actually, when you watch analog TV, you’re not really seeing a complete image at all. You’re just staring, mesmerized, at a tiny point of variably glowing light chasing itself back and forth across the screen. Your brain creates the image thanks to persistence of vision, the fact that when light entering the eye is shut off, the impression of light persists for about a tenth of a second. Since the entire screen is painted with the electron beam 30 times a second, your brain sees it as a complete image.

Meanwhile, the sound and signals to synchronize the TV’s picture tube with the originating signal are transmitted via FM.

Colour television is a more complicated version of the same thing, using a camera that has three tubes, one that receives only blue light, one for green, and one for red. The three signals from these tubes are re-mixed into two signals, luminance (brightness), which produces a black and white image, and chrominance, which carries the information necessary for the TV set to recreate the full colour image using three electron guns and a pattern of colored glowing dots on the screen.

It’s an elegant and long-standing technology. So why change it?

Quite simply, digital television is superior. An analog TV set can display 525 horizontal lines of resolution. In computer monitor terms, it works out to about 512 X 400 pixels.
Modern screens far exceed that, offering more detail, sharper images and better colour.

Most Canadians already receive digital TV signals through their cable company, a satellite dish or over the Internet. But for those few who are still making do with exterior antennae (as I did growing up: many’s the time I climbed our roof to repoint, repair or replace our TV antenna in the vain hope of watching Star Trek without static), the change-over means they’ll have to get a digital-to-analog converter box.

Those boxes mean there may still be a little life left in your old analog TV that receives over-the-air signals. But it’s a technology that’s really on its last legs. And unlike vinyl records, it’s a technology few will miss.

Too bad, in a way. There’s a great view from the roof!

Permanent link to this article: https://edwardwillett.com/2011/08/out-with-the-old-in-with-the-new-digital-tv/