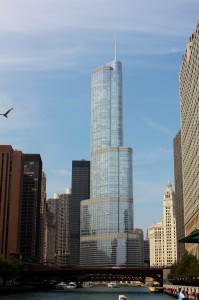 At the end of August and beginning of September, I and my wife and daughter were in Chicago for the World Science Fiction Convention…and a fair bit of touristy sightseeing, including taking in the (highly recommended) architectural river tour offered by the Chicago Architecture Institute.

In the little over a decade since the last time we were there, numerous new skyscrapers have sprung up, each unique, each adding its own unique features to one of the world’s greatest city skylines.  I particularly liked the Trump Tower (the one in the photo), now the second-tallest building in the city, whose pale blue glass blends beautifully with the sky and the reflection from Lake Michigan.

But if research led by Shu Yang of the Department of Materials Science and Engineering at the University of Pennsylvania in Philadelphia pans out, future skyscrapers may be even more spectacular. Shu Yang envisions buildings coated with artificial butterfly wing material, as brilliant iridescent as anything in nature.

I admit I would have missed the significance of Yang’s work if not for a report on it by Joanna Carver, a reporter for NewScientist’s Short Sharp Science blog (newscientist.com/blogs/shortsharpscience), since even had I come across Yang’s paper in the journal Advanced Functional Materials on my own, I probably wouldn’t have realized that “Exploiting Nanoroughness on Holographically Patterned Three-Dimensional Photonic Crystals” could lead to butterfly buildings.

Nor I admit, would the first sentence of the summary, “The fabrication of three-dimensional (3D) diamond photonic crystals with controllable nanoroughness (<120 nm) on the surface from epoxy-functionalized cyclohexyl polyhedral oligomeric silsesquioxanes (POSS) is reported,” have led me any further toward that conclusion.

But apparently, butterfly buildings is indeed where this could lead.

As Yang points out in the introduction to her paper, “structural coloration” (as opposed to coloration produced by a pigment, as in paint) is usually the result of the interference, diffraction, or scattering of light by arrays of transparent materials. For example, if you have a stack of thin, transparent films whose refractive (light-bending) properties alternate between low and high, you get a strong reflection of light…and interference of the light waves can lead to complete “stop bands” or “photonic band gaps,” allowing certain wavelengths of light to be reflected totally while others or not.

The classic example of this is in butterfly wings. The Morpho butterfly’s wings are brilliantly blue because of this kind of interference. They are also “superhydrophobic”—extremely water repellant—due to “nanoroughness,” roughness at an extremely small scale.

Yang set about to recreate this butterfly-wing combination of iridescent colour and superhydrophobia by using a technique called holographic lithography, using a laser to make a 3D cross-linked pattern in a special kind of material called photoresist. A solvent is then applied to wash away all of the photoresist untouched by the laser, and the result is a 3D structure that has the structural coloration seen in butterfly wings. A second solvent is then applied that roughens the surface, creating the nanoroughness that makes butterfly wings water-resistant.

There are multiple uses for such a coating. Yang has a grant to develop butterfly-inspired coatings for use on solar panels. In that case, the water-resistance would be the key selling feature: such coatings would keep the panels drier, cleaner, and hence more efficient.

But she is also working with architects to create a low-cost version of the material for use on buildings. “The structural colour we can produce is bright and highly decorative.” And, of course, water-resistant, so it wouldn’t have to be cleaned as often. Plus, Carver says in the Short Sharp Science article, such coatings could be connected to a computer and tuned at will to produce whatever colour/transparency combination was desirable. A prototype version of the coating is supposed to be available by June.

Who knows? By the next time I get to Chicago, there may be new buildings that gleam with iridescent color like giant, folded butterfly wings…and I’ll be able to impress the architectural river tour guide.

At which point, of course, I’ll probably get thrown off the boat.

But it’ll totally be worth it.

Permanent link to this article: https://edwardwillett.com/2012/10/butterfly_buildings/