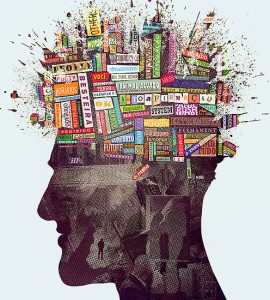 Consider this my grand pronouncement.

It’s not as if I can’t come up with words. Give me a keyboard, I make words. It’s kind of like a reflex, something hard-wired, although I’m not quite sure how it evolved since it seems unlikely I’m the descendant of ancient proto-humans who survived to reproduce only because they were good at wriggling their fingers while making up stories.

In any event, here I am at the keyboard, and typing, and the thing that prompted this sudden surge of verbiage was the fact that I seem to have come down with a distressing affliction.

I call it Editor Brain.

Here’s the backstory. From last fall until last spring, I was writer-in-residence at the Regina Public Library, in which capacity I met with some 75 individual writers and helped them (to the best of my ability and their willingness to be helped) with their various projects, which ran the gamut from children’s stories to poetry to nonfiction to fantasy epics. This involved a lot of reading and a lot of notating of other author’s manuscripts.

With the conclusion of my nine-month term (and, alas, the end of regular paychecks) I decided it was time to hang out my shingle as a freelance editor, my theory being that with so many people seeking to self- (ahem) ah, independently publish their manuscripts, there will be growing need for people willing to edit those manuscripts.

I’ve had a few inquiries since then and recently completed my first full-fledged novel editing job, of an epic fantasy. I discovered a few things.

First, I discovered I was drastically undercharging. Apparently it takes me longer to edit someone else’s book than to self-edit my own. Lesson noted.

Second, I discovered that editing someone else’s work is a grand way to look critically at one’s own work. Focusing closely, on a line-by-line basis, on the weaknesses and verbal tics and oversights in someone else’s novel has made me more aware of my own failings in those regards as I look at my own work, which is useful what with a new fantasy trilogy starting in a few months’ time. (Masks, by E.C. Blake, DAW Books, November 2013. Don’t worry, I’ll remind you.)

But third, I discovered that once you get the editing part of your brain into high gear…it’s hard to shut it off. Hence Editor Brain.

While still in the throes of editing this other author’s fantasy epic, I began reading the third book in a quite successful fantasy trilogy I had very much enjoyed the first two books of. I remember thinking of the first book in particular how marvelously it was written, how evocative certain passages were, how wonderful the action scenes were, etc., etc.

But as I started reading the third book, I instead started thinking, “This bit of dialogue is clunky…that bit of description is dull…this action scene could stand some tightening up.”

I’m still enjoying the book, don’t get me wrong—but not in the same way I remember enjoying the first book of the trilogy. I’m seeing the seams in the world-building, spotting the rivets holding things together, noticing the dust bunnies under the furniture, that sort of thing.

It is precisely, I think, like what happens when I go to a play or musical. Having done a considerable amount of acting myself, both in community theatre and professionally, I notice things like how the sets are put together, where they hung the lights, how effective (or ineffective) the sound effects are. I know what happened backstage when an actor had to make a quick costume change, because I’ve been in that position…and so forth.

When I was in my 20s, having come back from Harding University where I sang in the top-notch A Cappella Chorus, I remember once listening with my father to a recording he had made of a recent concert by the high school chorus he directed. We were commenting back and forth on where the sopranos were a little flat and where the diction wasn’t what it should have been, and my mother eventually burst out, “Can’t you just listen to the music and enjoy it?”

Well, yes, we could…but it’s not as easy as it used to be.

Editor Brain has the same effect. Yes, I can read just for pleasure…but it’s not as easy as it used to be.

On the flip side, the more I work with other writers, the better, I hope, I’m able to craft my own writing. The ultimate goal? Creating work of my own that other people can read for pleasure without being brought up short by some clumsiness of expression or infelicity of dialogue.

Except, probably, for other people who, like me, are afflicted with Editor Brain.

Alas, from what I hear from other writers and editors, there is no cure. Still, with perseverance and determination, I do hope to continue to live a normal life.

Permanent link to this article: https://edwardwillett.com/2012/11/on-suffering-the-affliction-of-editor-brain/