The curious case of a previous Edward Willett, and his letters to Mrs. Bellamy

My daughter likes to write, too. Here’s a recent piece, illustrated by the author. 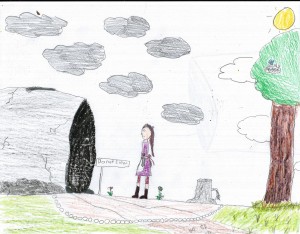 The Kingdom of Averendel was dying. One girl looked out of her window, the rain drizzling outside. The girl was crying. Her little sister came in with a letter. The girl turned, wiping tears from her eyes.

“You have mail!” the littler girl said cheerfully.

The older girl forced a smile on her face. “Thank you,” she said. As her little sister left the girl opened the letter and read three words: Find. The. Cure.

Genevieve was going to the castle. She was sure that was where the letter had come from. She walked quickly, not wanting to be out on the deserted streets for too long. She shuddered at the thought of why the streets were deserted.

She started walking up the path to the castle. At the gate Genevieve told the guard that the queen had called her. After she was let in she slowed and looked at her surroundings. She knew the only reason she had been called to the castle was that when her mother was younger she had been the queen’s (at the time the princess’s) lady in waiting. They had become friends and when Genevieve’s mother left to marry her father the queen remembered and made sure that Genevieve’s family was well cared for.

But even that won’t save mother, Genevieve thought.

Inside the castle, Genevieve walked slowly, taking in everything.

The castle is beautiful, Genevieve thought. The inside was pearly white marble, covering the floor, ceiling and walls. Enormous pillars held up the roof and arches encased magnificent doorways. Tapestries and paintings of battles and feasts lined the walls. The glowing torches made the hallway bright and cheery but nobody felt that way.

When she reached the throne room Genevieve knocked on the door.

Nervously Genevieve opened the door. Until now she had been sure the letter was from the queen. Quietly she said, “Did you send the letter?”

The queen paused before answering, “Yes.”

“Why?” Genevieve asked. “How can I find the cure to the plague?” She looked at the queen helplessly. “I—I don’t think I can.”

“You must,” the queen said gently.

Suddenly Genevieve burst out, almost angrily, “Why me? Why not one of your knights? I can’t go out and find the cure to the plague! That’s impossible!”

The queen stood up. “I chose you because you have motivation!” the queen yelled. Then her voice softened. “With your mother dying you have something to strive for. Also,” she slumped in her seat, “most of the knights are sick and with the king away…you’re brave and I need your help.”

Genevieve nodded at the defeated queen.

“I will help you,” she said, then she turned and left.

“But you can’t leave!” Genevieve’s little sister Arrieta said. “What will I do without you?”

Genevieve fought back tears. “You have mother,” she said, “and Lucia will come after you.”

Arrieta crossed her arms. “I don’t like Lucia.” Lucia, a friend of the family, was basically the house’s babysitter.

“You will stay with her and not complain,” Genevieve said sternly. Arrieta looked mad but agreed.

Genevieve looked at the door to her mother’s room. “Good-bye,” she whispered. “I’ll miss you.” Then she packed her bag and left for the woods, leaving her house in shadows.

At the gate to the woods Genevieve saw the queen waiting. She bounded down the slope, then slowed. Someone was with the queen. Cautiously she led her horse to the gate.

The queen nodded. “This is Jhonn. He is to be your companion on the journey. He is an expert swordsman and will protect and help you.”

“Greetings, Genevieve,” he said, his voice dripping with sappiness.

Genevieve’s first thought was, I hate you.

“Let’s get on with it,” Genevieve growled.

“Thanks, Gen. I’m sure it will be easier for both of us.”

It had been five days since Genevieve had started her quest and all Jhonn had done was talk.

Suddenly Genevieve yelled at Jhonn, “Can you be quiet for ten seconds?” Jhonn shut up. Pleased with herself, Genevieve had time to think.

The cavern of mysteries could be dangerous so I’ll have to use my wits and be careful. Who knows what’s in—

“Why are you talking?” Genevieve yelled. “Didn’t I tell you to be quiet?”

Genevieve put a hand to her head. “I didn’t really mean be quiet for just ten seconds, I meant—” She was interrupted by violent coughing.

Oh, no, Genevieve thought. Not you, too.

“Are you okay?” she asked worriedly.

“Oh, yes, absolutely fine.” Then Jhonn fell off his horse.

“Jhonn, Jhonn, talk to me!” Genevieve cried. He’s sick, Genevieve thought. I have to get him to shelter so he will be safe.

A little way ahead Genevieve found an alcove for Jhonn to stay under. Leaving some food and a note saying where she had gone, Genevieve looked at Jhonn, turned, and left for the cavern of mysteries.

At the entrance to the cavern of mysteries Genevieve made a torch. She took a branch, ripped some cloth off her dress, put oil on the cltoh and set fire to it, only thinking of one thing as she worked: I will find the cure.

It was dark. Very dark, and even with the torch it was hard to see. Her bright green eyes looked around the cave warily.

What have I got myself into? Genevieve thought. What if I die here? Who will look after Arrieta and mother?

Suddenly Genevieve heard a voice. “What have you gotten yourself into?”

“I, Genevieve,” the voice said, “am your worst nightmare, and if you want the cure you’re going to have to use your wits!” The voice laughed. Genevieve saw the vial of potion with the cure and ran towards it.

“Not so fast, Genevieve.”

Genevieve was plunged into a nightmare.

Where am I? Genevieve thought. This isn’t Averendel.

Then she saw something horrible. She was right. She wasn’t in Averendel. She was somewhere else: Palor. Her father was on a stage, hands tied behind his back, rope around his neck.

Genevieve heard a voice, “And now this traitor will die for what he’s done.”

“No!” Genevieve heard herself scream. “You can’t!”

“But I will,” the executioner said.

Genevieve ran. She saw a lake and jumped in.

She was back in the cavern of mysteries. I’m out! she thought, relieved.

Then the voice said, “It’s not over yet,” and Genevieve was plunged into another nightmare.

“She could die tomorrow,” a doctor said.

Genevieve was confused. “What do you mean?” Genevieve asked.

“She may not make it.” Genevieve looked at the bed and gasped. There was her sister, sick and dying. She shrank back.

I have to get out! Genevieve thought desperately. But how…?

She blocked out everything around her, then opened her eyes. She was still with her sister. She ran for the door. Locked! She looked at the bed. The doctors lowered their heads.

She opened her eyes. She was back. She ran for the vial.

“What are you doing?” the voice screamed. “How are you awake?”

“Because,” Genevieve whispered, “I have motivation.” Then she turned on her heel, left, and collapsed outside.

Genevieve held her breath. Would it work?

After five days to get back to the castle, Genevieve had given the cure to the queen and was promised that Jhonn was in good hands and would be okay. She was sent back with some potion.

The whole room seemed still. Slowly her mother resumed breathing and opened her eyes. Genevieve cried as she walked toward her mother. Suddenly she was on top of her mother, crying with happiness.

Her mother smiled weakly. Genevieve didn’t even hear the people in the room cheer: all she thought was, “She’s alive! My mother is alive!”

Permanent link to this article: https://edwardwillett.com/2012/12/kingdom-in-shadows-by-alice-willett-age-11/