Masks by E.C. Blake: Prologue and Chapter One

Tickets on sale for my play As Time Goes By: A Love Story with Music and Ghosts 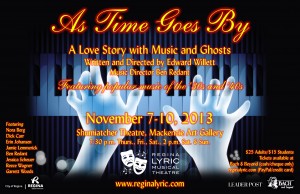 Tickets are now on sale for my play-with-music, As Time Goes By: A Love Story with Music and Ghosts, featuring music from the ’30s and 40s found in the old house where I live that used to belong to my wife’s grandparents, and then to her parents (and indeed, we are dedicating the show to the memory of my wife’s mother, Dr. Alice Mary Goodfellow Hodges, a most remarkable woman who unfortunately died on August 17 and so will not be able to see the show inspired by her parents’ home.)

Here’s how I’m describing the show in publicity materials:

A warm, funny, touching play by award-winning Regina writer Edward Willett, As Time Goes By features songs from the ’30 and ’40s, wrapped up in two modern-day love stories and and one told in flashbacks.

The play runs November 7 to 10 at the Shumiatcher Theatre, Mackenzie Art Gallery. Show times are 7:30 p.m. Thursday, Friday and Saturday, and 2 p.m. Saturday and Sunday. Tickets are $25 for adults and $15 for students, and will be available at Bach & Beyond in the Golden Mile Centre (cash or cheque only) or online at reginalyric.com (PayPal or credit card).

Noted nightclub entertainer Johnny B. (played by Reece Wagner) has just inherited his Great Aunt Dorothy’s house in Regina. His career isn’t going so well, so he arrives in town planning to sell the house for a quick buck. He’s accompanied by his long-suffering manager, Grace (Jamie Lemmerick), a Regina native, and his hoping-to-get-paid-soon piano player, Tim (Ben Redant, who is also the music director for the play). They discover a wonderful grand piano and a wealth of old music that Johnny, with Grace’s urging, decides to turn into a new act…although Grace has a bombshell she’s about to drop on Johnny that could change all his plans.

Tim thinks they should focus on the comic songs, and he finds a like-minded spirit in the form of Betty (Jessica Scheuer), the realtor Johnny’s brought in to sell the house. The two hit it off at once.

There’s something odd about the old house that the modern-day couples can’t quite put their fingers on. Unbeknownst to them, Great Aunt Dorothy (Erin Johansen) may be deceased, but she hasn’t departed: she still present as a ghost, and her own love story from her youth plays out in flashbacks, from the time when she was in love with Harold Horn (played by Garrett Woods as a young man and Dick Carr as an elderly one), who left town to pursue his own signing career and never came back.

Rounding out the cast is Nora Berg, who plays Dorothy’s friend Helen and the nurse in the home where Harold ended his days.

If you’re in Regina November 7 to 10, please come out to see the show. We really do have a remarkable cast and I can guarantee a wonderful evening’s entertainment.

Permanent link to this article: https://edwardwillett.com/2013/09/tickets-on-sale-for-my-play-as-time-goes-by-a-love-story-with-music-and-ghosts/