Twist of the Blade nominated for Aurora Award!

Song of the Sword long-listed for the Sunburst Award

My fifth book (out of 10) this year: Fertile Ground, 50th anniversary history of the Saskatchewan Mining Association 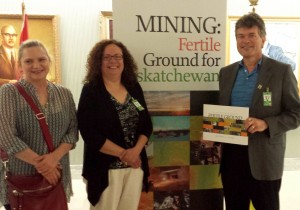 I really enjoyed writing Fertile Ground: I learned a lot about the history of mining in the province. The final product is lovely and of course will be widely distributed through the SMA’s many member companies, and presumably to libraries, so look for it if you get a chance.

So, to tally up. Book 1 of 2015 was Kiera Cass: All About the Author. Book 2 was The Adventures of Michael & Mia: Stewards of the Land. Book 3 was the mass market paperback of Shadows. Book 4 was Lake in the Clouds. Book 5 will be Faces. Books 6, 7, 8, 9 and 10 will be (though not necessarily in this order) Blue Fire (or whatever the new YA fantasy for Rebelight Publishing ends up being called), Cave Beneath the Sea (the fourth book in The Shards of Excalibur), Falcon’s Egg (sequel to Right to Know), and the revised editions of my old books on Ebola and disease-hunting scientists, now titled What You Can Do About Ebola and Infectious Disease Specialists: Hunting Down Disease.

It’s entirely possible I might add one more title…there’s a long-delayed project I’m expecting to finally come out this year. We’ll see.

Oh, and if I get time, there might be a couple of self-released books, too.

Imagine what I could accomplish if I wasn’t such a lazy procrastinator. Which I always feel I am.

Also, this may explain why I’m on the verge of wearing a hole right through the “E” key on my MacBook Pro. “A,” “S,” and “N” are also looking a little battered…

Permanent link to this article: https://edwardwillett.com/2015/05/my-fifth-book-out-of-10-this-year-fertile-ground-50th-anniversary-history-of-the-saskatchewan-mining-association/