Andy Warhol: Everyone Will be Famous for 15 Minutes (American Rebels) 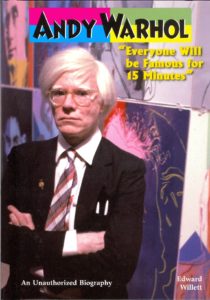 “Paintings are too hard. Machines have less problems…” In the 1960s, Andy Warhol became the most famous creator of a new style of art called pop art, which transformed mass-produced items of popular culture into fine works of art. From Campbell’s Soup cans to photographs of Marilyn Monroe, Warhol’s willingness to use anything and everything from the mass media in his work expanded the range of subject matter available to artists. His avant-garde films, artistic usage of American icons, and unconventional social life made him a controversial figure, both greatly admired and deeply reviled. A trendsetter rather than a trend-follower, a dispassionate observer of both the seamy and celebrity sides of life, Warhol was a true American rebel.

Permanent link to this article: https://edwardwillett.com/nonfiction/andy-warhol-everyone-will-be-famous-for-15-minutes-american-rebels/