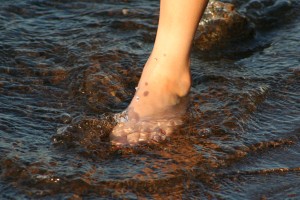 You know, it’s not easy being a writer.

Oh, I know, it doesn’t rank up there with, say, coal miner in physical difficulty or neurosurgeon in mental difficulty, but where it probably has it over both of them is in creative difficulty: the pressure to constantly come up with something new.

Heck, as a science fiction and fantasy writer, I’m expected to create entire worlds, whole solar systems, mythical creatures and believable characters out of nothing more than my own brain cells.

Wouldn’t it be great if there were some way to artificially stimulate creativity?

Turns out, there may be.

In a paper published earlier this month in PLoS One, an online scientific journal, researchers Richard Chi and Allan Snyder from the Centre for the Mind at the University of Sydney reported on a study they conducted that seemed to show that people receiving electrical stimulation of the anterior temporal lobes of the brain (located, basically, just above the ears) found it easier to figure out how to solve a difficult puzzle than those who didn’t receive that stimulation.

To provide the electrical stimulation, the scientists created what the press release from the journal calls “an electric thinking cap.” (Consisting of two sponge electrodes soaked in salt water fastened to the head by a rubber strap, in order to set up a weak current through the targeted part of the brain, it’s more properly called a tDCS device, for “transcranial direct current stimulation”.)

The puzzle presented to the participants involved correcting a false arithmetic statement presented in Roman numerals constructed from matchsticks. The participants had to figure out how to make the statement correct by moving a single matchstick from one position to another: for example, turning an X into a V.

The results: while only 20 percent of non-thinking-capped participants could figure out a complex version of the problem (after practicing with a series of easier problems) in the six minutes allowed, 60 percent of those receiving stimulation managed it.

Past research has indicated that the left anterior temporal lobe (ATL) is associated with solving problems using known, tried-and-true methods, while the right ATL is associated with what is commonly called “thinking outside the box”: coming up with new ways to solve problems.

The researchers placed their electrodes on the subjects’ heads so that the flow of current suppressed activity in the left ATL, while enhancing it in the right.

The brain is always trying to find a balance between “exploration and exploitation,” as neuroscientist David Eagleman of Baylor College of Medicine puts it: in other words, between finding new ways of doing things and using methods it has already figured out.

Eagleman points out that there’s a downside to “thinking outside the box” in survival terms: “The only way an animal can get by…is using what it has learned in the past and coming up with new solutions,” he says. “If you were an animal in the wild trying to constantly come up with new solutions to every problem…you’d probably starve to death.

“What this study shows is that you can tip the balance of this battle in favor of exploring new possibilities.”

One uncertainty is whether the increase in creativity arose because of the enhancement of activity in the right ATL or the suppression of it in the left ATL, or if it was a combination of the two.

However, according to Snyder, the research was inspired by reports of accident victims who, after damaging the left side of their brains, suddenly “burst out into the arts or other types of creative activities,” which would seem to imply suppressing the left ATL alone is enough to enhance creativity.

So, does this mean I and other types who depend on being creative for our livelihoods will be able to buy a thinking cap at Staples any time soon?

Alas, no. But as research continues, who knows? Snyder isn’t discounting it. Although the science is in its infancy, he says the “thinking cap” has potential applications in problem-solving…and, yes, in the arts.

Perhaps, in the future, there will no longer be any need for writers to gaze mournfully into space, take long walks in the rain, or starve in garrets as they seek their muse.

Instead, they’ll slap on their “We ‘R’ A Muse” patented electromagnetic thinking cap (available in a variety of designer colors!), plug it in, and pop out a masterpiece by supper.

Not very romantic, I admit. But it sure would take the pressure off.

The photo: Barefoot in Bemidji.

Permanent link to this article: https://edwardwillett.com/2011/02/the-thinking-cap/