The Boxing Day solution to the Christmas Day rebus 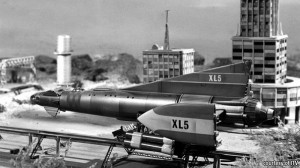 So Gerry Anderson has died. I don’t know that I could say I was a huge fan of his shows—well, I liked UFO a lot, but the Supermarionation things, though I watched quite a few of them, weren’t just in the “uncanny valley” for me, they’d pretty much fallen into the “uncanny canyon” and were well on their way to the lowest depths of “uncanny hell.” The puppets might be well-suspended, but my disbelief never was.

(Funny thing is, I never had that problem with the Muppets, which I love. Maybe because they didn’t even try to look human.)

However, Gerry Anderson did have one huge impact on me: Fireball XL5 is the first science fiction program I can remember seeing, in those I-was-very-little pre-Star Trek days. (Star Trek’s original series itself I don’t know that I ever saw in its initial run, because our TV broke on the move up to Canada from Texas in 1967 and we didn’t have one for a couple of years. Also, I don’t think Star Trek even aired on either of the channels we could get when we did get a TV again—neither CKCK, which came in clearly, or CBC, which we watched through a constant on-screen snow storm.)

I remember nothing of Fireball XL5’s premise or characters; I have a vague memory of the eponymous spaceship, however, possibly from the opening credits. (I know, I know, I could YouTube it and see everything all over again, but this is a memory piece, darn it, and that would be cheating.)

For years, when I drew spaceships (and believe me, as a kid, I drew a lot of spaceships) they looked more like Fireball XL5 than anything else; and when, while still in Texas, I got a red bicycle (kind of a consolation prize for a school trip to Six Flags Over Texas being cancelled), I immediately took to calling it Fireball XL5.

My very first short story, “Kastra Glazz: Hypership Test Pilot,” features a spaceship with the call letters XRCI2: I’m pretty sure it started with X because Fireball XL5 started with X, although the real-life X-15 rocket plane probably figured in there somewhere, too.

I do remember watching quite a bit of Thunderbirds when I was sick with rheumatic fever (which kept me bed-ridden for six weeks when I was in Grade 5 or 6, and was when we finally replaced our TV) and thereafter, but again it was more because the various ships were cool than because I could ever quite buy those creepy puppets as characters I should actually care about.

Still, in some small but definite way, Gerry Anderson’s work was  one of the many ingredients that went into the stew that eventually produced Edward Willett-the-science-fiction-and-fantasy writer. I’m sorry to hear of his death, and I offer him my posthumous thanks…

Permanent link to this article: https://edwardwillett.com/2012/12/gerry_anderson_and_me/