To mark the first day of winter…

Things my editor told me 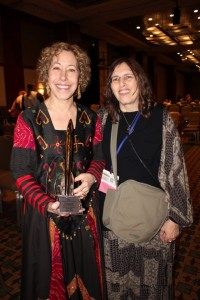 I think I’ve mentioned—though no more than a gazillion times or so, so you might have missed it—that my next book to be published by DAW will be Masks, first book in a trilogy (and hopefully series) that will continue with Shadows and Faces.

Earlier today I spent a couple of hours on the phone with Sheila Gilbert, my editor (that’s her on the right in the picture, with her co-publisher and co-editor at DAW, Betsy Wollheim, who won the Hugo Award for Best Professional Editor Long-Form this year at the World Science Fiction Convention in Chicago), who had a…ahem…few notes about Shadows, the second book. Plus a few additional notes for Masks which will require more rewriting of that before I even start the rewrite of Shadows…or plunge fully into Faces.

I’ve gone through this process several times now, but you haven’t, so I thought you might be interested to know, not so much pecifically what Sheila had to say about Shadows (since the specifics would be meaningless until the book comes out), but the kinds of things she always tells me…because they’re the kinds of things any writer can benefit from.

Let’s begin with worldbuilding, shall we? As, indeed, many fantasy writers do. But here’s the thing: no matter how much thought you put into your world before you begin writing, you will find yourself, as you write, wandering into odd corners of that world that you didn’t think through in detail beforehand because there was no need.

In the heat of writing, it’s easy to paper over cracks in the world and pretend no one will see them, but the bright light of editorial review has a way of making them stand out. It’s a good idea to fill them in properly before readers start poking at the world, too, because you can bet someone out there has a pocket knife and is going to be digging the point into anything that looks a bit flimsy.

So, yes, there are a number of things about the world of Masks and Shadows and Faces that I haven’t yet thought of deeply enough to ensure believability, which Sheila gently but firmly brought to my attention.

The believability of characters is even more important. For me, this often means adding more depth, more back story to inform or motivate the current actions of the character, or additional scenes in which we see the character in interaction with other charactesr so we get a better sense of how they relate to each other.

Sometimes changes are more major. We made just such a change during our discussion this morning: we’ve decided to make my main character, Mara, two years older—15 rather than 13. Masks was originally conceived as a one-off, fairly short, YA fantasy, not necessarily for DAW. As the story has grown and become both more complex and darker than I originally envisioned, the things Mara goes through and the way she reacts to those events seem too much for the very young teen she started out to be. So she’s gaining a couple of years, and in the process, solving a number of believability issues.

Then there’s the main bad guy. In Masks, he’s largely offstage because of the way that book plays out, but in Shadows he moves much more to the center of things…and at the moment, he’s still a bit of a cipher. I need to develop him more, for, as Sheila said (and here’s a quote that every writer should keep in mind), “If your character doesn’t face a strong enough challenge or enemy, she’s not that strong and her victories don’t mean as much.”

Then there’s believability of the plot.  Generally this takes the shape of, “the way you had things happen was awfully convenient for the writer, but it didn’t really make sense in terms of the way things would happen in the real world.”

One specific example from Shadows: the two men-at-arms who conveniently drowned and removed themselves from the story so that the character they were guarding could be cast ashore all by his lonesome perhaps should at least have been smart enough not to wear armor in a boat, armor which a little-too-neatly dragged them under and out of the tale.

While it’s true a fictional world isn’t the real world, and everything that happens in it happens through the artifice of the writer, and the characters are, by any meaningful definition, nothing more than puppets being manipulated by the author, the trick for all of us tellers of tales is to make it seem as if everything that happens occurs not because the writer made it happen but because of the actions of the characters and the nature of their world. If the reader begins to see the author’s hand pushing scenery around and pulling strings, then the illusion is broken and the story is unsatisfactory. Deus ex machina is always a temptation when story problems arise.

I have occasionally heard the opinion that fantasy is easier to write than other forms of fiction because “you can just make stuff up.” In fact, writing believable stories set within the confines of a fantasy world is, I believe, harder than writing stories set in some aspect of the real world, because you can take nothing for granted. It’s the difference, in movie terms, between shooting on location and shooting in a soundstage. In the former case, part of the work is done for you by the sky, the mountains, the trees, the buildings, while in the latter, every single thing has to be built or added in later via CGI.

If I do my job well, you won’t be able to tell. If I do my job poorly, you might still enjoy the story, but there’ll always be that little niggling voice that says, “well, that looked fake,” not to mention, “where did they cast those awful actors?”

Left to myself, I’m sure that would happen more often than it does.

Permanent link to this article: https://edwardwillett.com/2012/12/things-my-editor-told-me/